While the costs of protecting the environment are often seen as impediments to economic development, a new analysis of different measures to control air pollution in India reveals that the costs of even stringent controls are outweighed by their economic and social benefits. 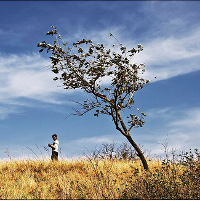 The research, which was recently published in the journal Environmental Science and Technology, shows that advanced and costly measures to reduce fine particulate matter would benefit development by not only improving air quality, human health and longevity in India, but also pay for themselves in a few years by increasing productivity.

Fine particulate matter (PM2.5) can travel far down into the lungs contributing to illnesses such as cardiovascular diseases, asthma, and lung cancer. Current levels of PM2.5 in most of India exceed the World Health Organization (WHO) guideline of 10µg/m3 by more than a factor of four. And if the level of consumption of energy in India grows as expected, without additional air pollution controls, concentrations of PM2.5 in many parts of India will more than triple by 2030.

Current Indian air pollution legislation would not stop the growth of pollution, and present levels of PM2.5 would increase by another 50%. Only implementing advanced controls could cut pollution and bring PM2.5 levels closer to the WHO guidelines.

The direct costs of such measures would amount to about half a percent of GDP per year initially, and then fall to roughly three-tenths of a percent of GDP by 2030. However, focusing only on direct costs is restrictive. It ignores the fact that investments in cleaner air will reduce the number of sick days experienced by the working population, and thereby increase productivity. Lower mortality will extend life expectancy, and people who expect to live longer will, in general, accumulate more assets in their working years, thereby increasing capital formation for productive investments.

“Our analysis shows that, once such indirect effects of investments in cleaner air are taken into account, the net impacts on GDP are marginal,” says IIASA research scholar Prof. Warren Sanderson.

“By 2030, life expectancy in India is expected to increase to 74.9 years. Implementation of these advanced measures would increase life expectancy by another 2.8 years, and save 2.5 million cases of premature deaths annually,’’ says IIASA demographer Erich Striessnig. “With a comprehensive perspective on development and well-being, the improved longevity more than compensates the loss in per-capita GDP, if measured by the widely used UN’s Human Development Index (HDI).”

Erich Striessnig: How to save lives—and money – by addressing India’s air pollution