A growing imbalance between phosphorus and nitrogen fertilizer use in Africa could lead to crop yield reductions of nearly 30% by 2050, according to a new study from researchers at the International Institute for Applied Systems Analysis (IIASA). 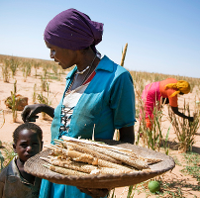 Underuse of phosphorus-based fertilizers in Africa currently contributes to a growing yield gap—the difference between how much crops could produce in ideal circumstances compared to actual yields. This phosphorus-specific yield gap currently lies at around 10% for subsistence farmers, but will grow to 27% by 2050 if current trends continue, according to a study published today in the journal Global Change Biology.

“This research shows that the imbalance between nitrogen and phosphorus applications has the potential to further limit food production for a growing population in Africa” says Marijn van der Velde, a researcher now at the Joint Research Centre of the European Commission, who led the study while working at IIASA.

While nitrogen-based fertilizers can be produced by a process that extracts the element from the air, phosphorus must be mined from rock—and reserves are limited. That makes phosphorus fertilizers expensive, especially in the longer term.

“Farmers with limited money are more likely to buy and have access to cheaper nitrogen-based fertilizers,” says van der Velde. “While this might work in the short term, in the longer term it has a negative effect on crop growth as soil nutrients become more imbalanced.”

The study used data from Food and Agriculture Organization (FAO) crop trials as well as an established large-scale crop model to estimate how the imbalance affects current and future crop yields.

“Previous research has looked at these effects on a field and local scale, but this is the first study to do so at the continental scale,” says IIASA researcher Christian Folberth, who also worked on the study.

But because of the cost of phosphorus, that remains a challenge. ”While much of the remaining phosphorus reserves are found in Morocco, on the African continent, we need to find better ways for African farmers to access this precious resource” says van der Velde.

The global phosphorus cycle is, besides nitrogen, also increasingly growing out of balance with carbon, the subject of another recent paper by the same group of researchers and a new European Research Council grant for continued research by IIASA and an international team of scientists.

“The change in the stoichiometry of nitrogen and carbon from rising atmospheric CO2 concentrations relative to phosphorus has no equivalent in the Earth’s history and the impacts will go beyond the agricultural sector.” says van der Velde.

Read an interview with Michael Obersteiner and Marijn van der Velde on the problems with phosphorus.