A new IIASA study shows that in most European countries, if labor force participation rates remain at current levels, by 2050 it would be necessary to raise pension ages above age 68. 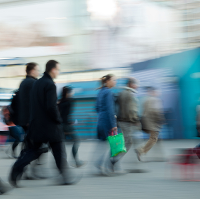 Blurred image of people rushing to work in the morning. © Rafal Olechowski | Dreamstime.com

The new research, which was published in the journal Demographic Research, shows that increasing labor force participation by as little as 1 or 2 percentage points could allow pension ages to be reduced by one year without increasing the burden on the working population.

“Coping with aging populations is a challenge for most developed countries,” says IIASA population expert Sergei Scherbov, who co-led the study with Warren Sanderson, a researcher at IIASA and Stony Brook University.

In Europe and many other areas of the developed world, birth rates have dropped while life expectancies have increased, leading to a larger number of older people. When a greater proportion of the population is older, they rely more heavily on the younger working population to finance their pensions and healthcare. One way to fix the problem is to raise the retirement age, but this has proven unpopular.

A more effective strategy, says Scherbov, is to introduce policies to help more people join the workforce. Such policies include incentives to remain in the labor force, anti-age discrimination policies, reforming tax policy so as not to penalize workers, removing financial incentives to retire early, and careful management of disability pension systems.

“These policies are generally more politically palatable because they often remove barriers, allowing people who would like to work to do so,” says Scherbov.

The new study for the first time estimated the trade-off between pension age and labor force participation policies.

Scherbov says, “In many European countries, without new policies to increase labor force participation rates, normal pension ages would have to be raised well above 68 by 2050 to keep the burden on those working similar to the current burden.”