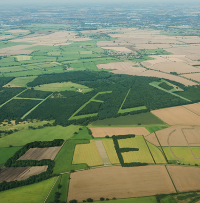 Time has nearly run out for players of IIASA’s Cropland Capture game. The game for mobile phone, desktop, and tablet officially ends on 9 May, 2014. That day, the highest scoring players from each week will be entered in a drawing to win prizes such as an Amazon Kindle, a smartphone, and a tablet.

But the biggest winner of the game is not one of the players—it is global land cover research, a vital area of study for informing global food security, identifying yield gaps, and monitoring crops affected by droughts. Current maps of farmland around the world are far from ideal: they rely heavily on coarse-resolution satellite data, which makes it difficult to distinguish cropland from non-cropland.

The first results from the project are being presented this week at the European Geophysical Union general assembly meeting in Vienna, Austria.

So far during the six-month data-collection period of the game, nearly 3000 players have validated more than 4.3 million of these 1km squares, an area larger than India.

“I had hoped that we would get maybe 1 million validations,” says IIASA researcher Tobias Sturn, the lead programmer of the game. “We have been amazed at the response.”

Researchers have already begun analyzing the data, which will inform an improved global cropland map, adding millions of validated data points to the current maps.

Play now! While the current data collection and competition period ends on 9 May, the game will continue to be available and data collected will be used for future research. Until then, there are still chances to win prizes in the game – weekly prizes will be awarded to one randomly selected correct answer, both this week and next week.

IIASA researcher Steffen Fritz, who leads IIASA’s Earth Observation Systems group that built the Cropland Capture game as well as other crowdsourcing initiatives, will speak about the project results at a press conference today at the European Geophysical Union general assembly in Vienna. The press conference will be live-streamed at http://www.egu2014.eu/webstreaming.html. More information>>