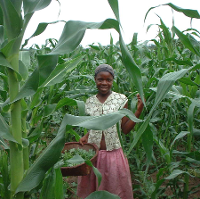 Unlike other regions of the world, Africa has struggled to increase crop yields. New research from IIASA and the International Food Policy Research Institute published this week in PLoSONE identified inexpensive and effective methods to increase yields, showing that applying small amounts of both phosphorous and nitrogen could improve crop yields substantially.

The study, led by IIASA researcher Marijn van der Velde, uses a historical database of 1358 Food and Agriculture Organization (FAO) crop fertilizer trials in Africa and South America, analyzing the data using systematic modeling tools. Phosphorus generally is the limiting nutrient in these weathered soils with 76% of the crop trials showing stronger crop yield response to phosphorous than nitrogen additions. The study further showed that affordable and balanced micro-dosing of nitrogen and phosphorus at 10 kg/ha could save between 4 and 25 million hectares of cropland, or potentially feed between 64 and 150 million people in South America and Africa respectively.

Van der Velde will also present this work at the upcoming EGU General Assembly in Vienna, Austria on 12 April.