The most important factor affecting the likelihood of limiting climate change to internationally agreed targets is when people start to do something about it, according new research from IIASA, ETH Zurich, and other institutions. 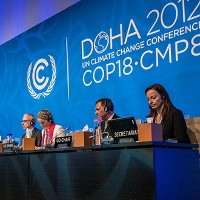 The new study, published today in the journal Nature, examined the probability of keeping average global temperatures from rising more than 2°C above preindustrial levels under varying levels of climate policy stringency, and thus mitigation costs. In addition, the study for the first time quantified and ranked the uncertainties associated with efforts to mitigate climate change, including questions about the climate itself, uncertainties related to future technologies and energy demand, and political uncertainties as to when action will be taken.

The climate system itself is full of uncertainty – an oft–used argument to postpone climate action until we have learned more. “We wanted to frame the problem in a new way and try to understand which uncertainties matter in trying to limit global warming by specific climate action,” said Joeri Rogelj, ETH researcher and lead author on the paper, who carried out the research at IIASA.

The most important uncertainty, according to the study, is political – that is, the question of when countries will begin to take serious action to reduce greenhouse gas emissions and implement other policies that could help mitigate climate change. Keywan Riahi, IIASA energy program leader and study co-author said, “With a twenty-year delay, you can throw as much money as you have at the problem, and the best outcome you can get is a fifty-fifty chance of keeping temperature rise below two degrees.” Two degrees is the level that is currently supported by over 190 countries as a limit to avoid dangerous climate change.

Social uncertainties, which influence consumer energy demand, were second-most important, the study found. Social uncertainties refer to things like people’s awareness and choices with respect to energy and to the adoption of efficient technologies.

"How much energy the world consumes going forward turns out to be a much bigger swing factor for climate change than the availability of technologies like solar and wind power, biofuels, and so on,” said IIASA researcher David McCollum, another co-author.“Energy efficiency, improved urban planning, lifestyle changes – these things on the demand side of the energy equation are so important; yet they receive relatively little attention compared to the supply side.”

The authors used scenarios to define how these factors affect the probability of staying within a given temperature target, at a variety of carbon prices. In addition to the 2°C target, the researchers also explored the distribution of costs and risks for limiting global warming to below 1.5°C and 3°C.Even for a 3°C target, a 20-year delay in the most stringent greenhouse gas reductions in combination with a high demand future means that there would remain a one in three chance that temperatures exceed 3°C. At the same time, limiting warming to 1.5°C with at least a fifty-fifty chance (a target supported by the least-developed countries and small island states) appears only to be possible if the world starts acting on climate change now and turns towards an energy-efficient future.

In order to make the results of their study accessible to the wider public, the authors developed a simple interactive tool that is free for download. The tool allows people to explorethe feasibility, costs, and likelihood of limiting warming to specific temperature targets. The tool can be downloaded from: http://www.nature.com/nature/journal/v493/n7430/full/nature11787.html#/supplementary-information

Read about the YSSP Program