Smarter use of nutrients will help clean up the planet, say scientists

IIASA researchers contributed to a new report that highlights the problems of nitrogen and phosphorus pollution, and proposes global solutions to help balance food production with pollution from fertilizers. 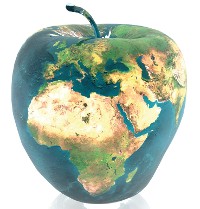 A new report commissioned by the United Nations Environment Programme (UNEP) highlights how humans have massively altered the natural flows of nitrogen, phosphorus and other nutrients. While this has had huge benefits for world food and energy production, it has caused a web of water and air pollution that is damaging human health, causing toxic algal blooms, killing fish, threatening sensitive ecosystems and contributing to climate change.

IIASA researchers Zbigniew Klimont and Wilfried Winiwarter contributed to the report, which will be released on 18 February. Winiwarter was recently appointed director of the European Center of the International Nitrogen Initiative (INI), an organization that aims to optimize the role of nitrogen in sustainable food production and minimize the element’s negative effects on people and the environment, and which co-organized the report.

“Our Nutrient World” was launched at the UNEP Governing Council/Global Ministerial Environment Forum in Nairobi, Kenya, from 18 to 22 February 2013. The study was carried out by nearly 50 experts from 14 countries.

The scientists suggest that a 20% improvement in nutrient use efficiency by 2020 would reduce the annual use of nitrogen fertilizer by 20 million tonnes. They term this global aspirational goal “20:20 for 2020”. Their analysis shows how this could provide a net saving worth around 110 (30 to 260) billion pounds Sterling per year. This figure includes implementation costs and financial benefits from reduced nitrogen use and improvements to the environment and human health.

The report stops short of recommending global legislation to control nutrient use, but recognizes that this a global problem, especially given the global trade in agricultural products.  It calls for an intergovernmental framework to address these issues, and proposes a road map of how such an agreement would look.

Lead author of the report, Professor Mark Sutton from the UK’s Centre for Ecology & Hydrology, said, “Our analysis shows that by improving the management of the flow of nutrients we can help protect the environment, climate and human health, while addressing food and energy security concerns.”

Pollution sources considered in the report include emissions from agriculture and combustion of fossil fuel. Globally around 80% of harvested nitrogen and phosphorus is consumed by livestock rather than directly by people, showing how global nutrient supply and pollution are dominated by humans’ choice to consume animal products.

The report proposes a package of ten key actions to reduce these pollution threats, and makes recommendations for shared action by governments, business and citizens.  Key points include: 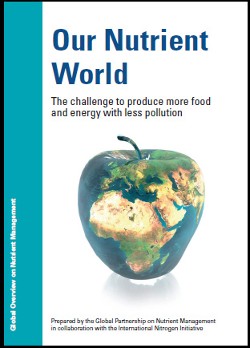 "Our Nutrient World" was released on 18 February.

Co-author Professor Oene Oenema based at Alterra and Wageningen University, the Netherlands, said, "Farmers in various countries can greatly decrease nutrient losses and increase nutrient use efficiency through coherent packages of measures. This efficiency gain is the result of research, education, demonstration, novel technologies and improved management techniques."

The report highlights how substantial progress has been made in some countries in reducing emissions from combustion sources and waste water treatment. By comparison, much less progress has so far been made in reducing emissions from agriculture or regarding citizens own choices.  The relationships highlight the importance of working with key ‘cluster points’ in nutrient chains where a few key individuals or communities, such as local leaders, supermarkets and governments exercise substantial control.

Professor Sutton said, “One option is to extend and strengthen the mandate of an existing agreement called the ‘Global Programme of Action for the protection of the marine environment from land-based activities’ (GPA). By clubbing together to meet multiple global challenges for food, energy, water and air pollution, climate and health, a much stronger gravity to motivate action can be expected.”

Our Nutrient World: The challenge to produce more food and energy with less pollution