Can we feel the temperature rising? 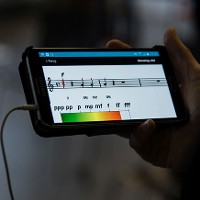 The increase of the Earth's temperature over the last 137 years is dramatic. However, it is hard for an individual to notice this change. One might observe more extreme weather, or the early arrival of migratory birds, but it is difficult to grasp the extent of long-term, gradual, and irregular changes. Global warming over a century remains abstract: it is impossible to feel the changes. Or is it?

1. How can we create an immediate, physical experience out of abstract data?

2. How might we convey the urgency of global warming in an emotional way, without resorting to simplification or propaganda?

3. How will the nature of the information change when scientific data is converted to music?

Four Drifting Seasons searches for a fresh and inventive way to tell the story of the data, bypassing the current politicized and polarized tone of debates on this topic. 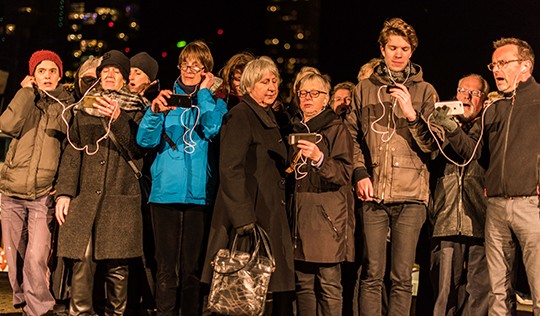 The artists focused on two sets of data: temperature data from NASA starting in 1880, and occurrences of storms and hurricanes. The data used was limited to the northern hemisphere. The piece can be updated every three months when new data is available.

2. Defining a relationship between creation and observation

The artists had to create parameters to protect the objectivity of the data.

1. The four seasons were divided among four voices. Since the goal was to create music for singers, four seasons fitted well with the structure of a mixed choir: winter-bass, spring-tenor, summer-soprano and autumn-alto.

3. To make the progression of global warming audible, the goal was for it to last 4 minutes. Every year lasts roughly 1.5 seconds. After tests, the artists set the tempo at 72 beats per minute.

4. Given the maximum span of the human voice, each 0.105°C equaled a single semitone difference in pitch. This amount may change in future iterations with new temperature data.

5. Only the most extreme storms were used as an extra musical effect in the years they occurred.

6. The yearly average temperature in the northern hemisphere was divided into four levels. The composer attached a certain dynamic (loudness) and expression (articulation) to the tones within these levels, to make the temperature rise audible. 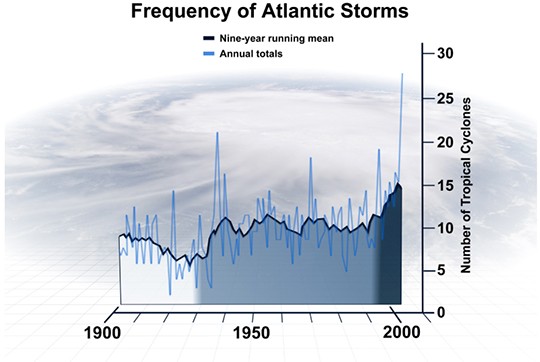 © Steve Deyo, UCAR. The annual average of observed hurricanes and tropical storms in the North Atlantic has risen from six in the first part of the 20th century (white), to 10 after 1931 (mid blue), to 15 after 1995 (dark blue), The blue line is the nine-year running average.

Since the music doesn’t follow the regular patterns of a traditional melody, it is hard for performers to judge their accuracy. To make the piece accessible to young performers and other non-professionals, the team developed an app called Conductless that each singer uses with a small headphone, to get the right pitches before singing them. Conventional music notation is shown on a screen. A centralized computer steers the process, synchronizing the different devices and making sure the piece runs at the right moment. The app has been tested with both (semi-)professional and amateur singers and supports singers of all levels.

4. Testing, sensing, and searching for the music

Tension between dissonant and consonant, chord progression, and rhythm creates a unique language. The challenge here is to stay true to the data while making a musical statement. The artists programmed software to generate multiple versions, using different pitches as starting points for each voice, while retaining the scaling for each subsequent year. For each year, the change in pitch reflects the change in temperature, but the starting point is a matter of choice.

The scaling of 0.105°C per semitone was derived by scaling the difference between winter’s highest and lowest temperatures (2.52°C difference between both extremes occurring between 1880 and 2016) to a professional singer’s vocal register of 24 semitones.

The musical score and app were tested several times. Besides the technical challenges there was the question of musical experience and reception by the audience. After a trial with actual singers, the concept had to be simplified to make the relationship between data and music audible. Earlier ideas, for example to incorporate the relative speed of rising or falling temperatures, were abandoned for the sake of clarity. Instead of dividing trends in temperature rise into seasons, a new layer that connected the yearly averages was introduced to create a unified trend. Furthermore, the chromatic approach to translating the data into pitches was replaced by a symmetrical approach, using whole tones instead of semitones. 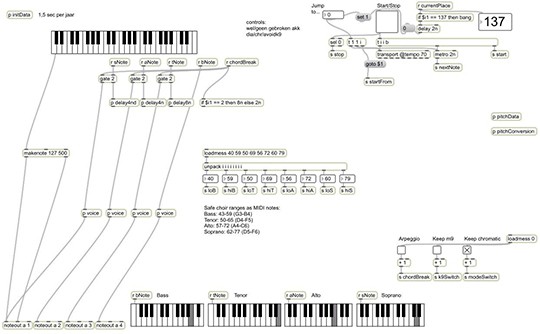 © Jan Driessen. Screenshots of experimental set up, translating data from temperature to text that can be readable by music notation software.

The first performance will take place on 18 September 2017 at Carnegie Hall in New York City as part of the Concert for a Sustainable Planet presented during the UN International Conference on Sustainable Development. The team will subsequently create a performance for video that can be disseminated via social media. All performance materials and technology will be available for free to choirs across the globe.

Four Drifting Seasons is fairly abstract so it does not generate “warm” emotion around “cold” data. But it raises constructive questions: Can we perceive more when we translate scientific data into music? Are our senses a reliable source of information? What do we gain by combining disciplines? Is there beauty in music generated by scientific observation rather than by human imagination?

This project shows a way for musicians and scientists to experiment with a new language that is both musical and scientific. Such a new language can enrich the art of exploration and storytelling that is the domain of both artists and scientists. Using the technology and techniques developed in this project, musicians can develop, create, and perform sets of data and bring it to diverse audiences. In this way, they become ambassadors and storytellers of the findings generated by science.

Merlijn Twaalfhoven is a composer exploring the richness of cultural diversity and human interaction, often engaging musicians of contrasting styles, local traditions or children in large events on spectacular locations. He recently composed a mini opera based on postcards from Aleppo, performed by members of the Royal Concertgebouw Orchestra and Syrian refugees. He has received an UNESCO award and collaborates with The Kronos Quartet and the New York Philharmonic.