The Sustainable Development Goals provide a plan for the world, with the ultimate aim of ensuring “life in dignity for every person on the planet.” But what does life in dignity actually mean? 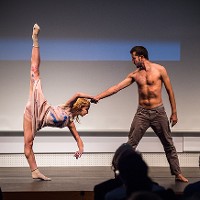 The Sustainable Development Goal (SDG) agenda was initially known as the “Road to Dignity by 2030.” In early spring of 2015, while drafts of the SDGs were under final negotiation, Gloria Benedikt, dancer and research associate at IIASA, embarked on a search to better understand the meaning of dignity. Through an artistic process involving Hussein Khaddour, a dancer living in Damascus, Syria, she hoped to gain insights into what the agenda’s ultimate goal - “life in dignity for every person on the planet” - could mean. Along the way, she aimed to tell a story about Syria not found in mainstream media coverage.

While reading the synthesis report, “The Road to Dignity by 2030,” published on 4 December 2014, Benedikt noticed how the goals concerned vital factors such as eradicating poverty and providing universal access to clean water, healthcare, and education, but did not address what dignity actually meant. At the time, Hussein Khaddour was living in circumstances in Damascus that better equipped him to provide expertise and insights into dignity than anyone living in the Global North, whose fundamental needs are already taken care of. Benedikt and Khaddour agreed to embark on a quest to together express the meaning of dignity in 2015.

Benedikt covered the academic research; Michael Rosen’s book, Dignity, served as a particular inspiration. Meanwhile, Khaddour did research on the ground, asking people around him what dignity meant to them. This was a complicated process, because during the Arab Spring in 2011, Syrians had taken to the streets demanding a dignified life. Ever since, talking about the term has polarized the population.

In April 2015, Khaddour travelled to Austria for a two-week rehearsal. Only hours after he had landed in Vienna, more than 800 refugees drowned in the Mediterranean Sea. On this sad note, Benedikt and Khaddour, European and Syrian, started work on their piece about dignity. It was also the day the refugee crisis started to dominate media coverage.

Benedikt and Khaddour worked for 12 days to choreograph the 20 minute piece. Khaddour had a background in breakdancing, Benedikt in ballet, both had later also trained in contemporary dance, which is where they found common ground. Breaks were occupied with talk about politics, the refugee crisis, and the role of the UN. A trailer for the piece was shot and a journalist covered Khaddour’s story.

During this time the pair reviewed the material and discussed the changes needed over Skype, frequently interrupted by power cuts in Syria. They also wrote the text for the video installation, and published a press release and trailer.

The second rehearsal period consisted of 10 more days in the studio, adding new parts, and fine tuning. Benedikt and Khaddour were interviewed by newspapers and radio stations.

One of the new parts Khaddour had added into the piece was a one minute solo on Harold Pinter’s Dead Body Poem which asks questions “Where was the dead body found? How was the dead body found? Who found the dead body?” On the last rehearsal day, 71 dead refugees were found in the back of a lorry in Austria. Benedikt remembered shaking that day in rehearsal when hearing the news and realizing how close to reality their art had become. The lorry incident was later considered a tipping point, prompting Austrian and German leaders to open borders.

InDignity premiered at the Political Symposium of the European Forum Alpbach on 1 September 2015 and was also viewed via live-stream, especially by artists in Syria. High-level decision makers from the UN and the European Commission were present. That day, hundreds of refugees arrived in Austria, and thousands followed in the next weeks. The response by the audience was emotional: a good portion of them were crying, and some observed that the work set the tone for a more honest and critical debate for the remainder of the symposium.

Panel: Benedikt and Khaddour took part in a panel discussion where they explained how their findings were relevant to the SDG agenda. They pointed out how people in war-torn regions not only need food and medicine; they also need nourishment for the soul to give them the mental strength to endure the hardships of daily life. This kind of essential nourishment, which art can provide, was not explicitly covered in the SDG agenda, they observed.

InDignity was covered in multiple newspapers and on the radio and a summary video was distributed via social media. Six weeks after the premiere, Benedikt and Khaddour travelled to China on the invitation of the Austrian Ambassador to China. They performed InDignity and led workshops on the topic.

Involving an artist from a war-torn region revealed insights from a community whose voice would not have been heard otherwise. Art acted as a medium with the aim of connecting Syrian civil society with both high-level decision makers—who typically encounter the conflict in the form of facts and figures on paper, and the general public—who generally learn about the conflict through mainstream media coverage. In addition, it offered a different perspective on the SDG agenda.

InDignity provides an idea for how artists might support the global transformation to sustainability through a creation process that generates understanding across cultures, employing the universal language of art and connecting people whose lives are seemingly worlds apart, yet interconnected. 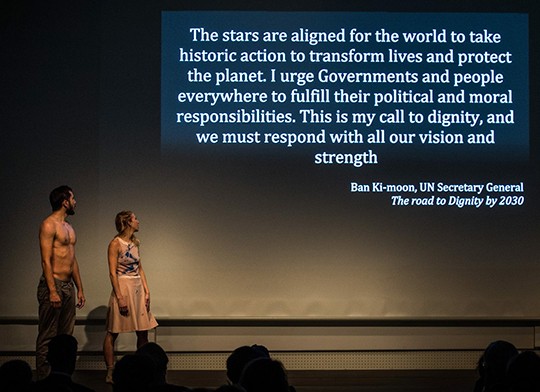 © Philipp Naderer. InDignity premiere at the Political Symposium of the European Forum Alpbach, 2015.