Declaration of the Alpbach-Laxenburg
Group

Leaders from across many sectors of society–politics, business, science, civil society, and the arts –have increasingly recognized the unprecedented dangers and opportunities of our age. 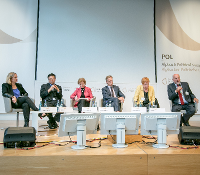 Seven decades ago, just weeks after the end of the Second World War in Europe, Alpbach, Austria hosted some of Europe’s leading thinkers to help chart a new course to a peaceful, prosperous and democratic Europe.  Three decades later, at the height of the Cold War, leaders from both the East and West established the International Institute for Applied Systems Analysis (IIASA) in Laxenburg, Austria, to bring systems science to bear on global problems that crossed political lines.  In 2014, with the world at another crossroads, the European Forum Alpbach and IIASA have joined hands to help the world face this generation’s unprecedented challenges.

Leaders from across many sectors of society–politics, business, science, civil society, and the arts –have increasingly recognized the unprecedented dangers and opportunities of our age.  Scientists have adopted the new term Anthropocene to indicate that humanity is changing the planet in dangerous ways: climate change, ocean acidification, destruction of biodiversity, and the over-use of land, water and other resources. Yet billions of people remain trapped in poverty or in low-incomes and yearn for economic improvement, while another billion or more people will soon be added to the world’s population.  Our generation uniquely faces the challenge of combining the imperatives of economic development, social inclusion and environmental sustainability.

The opportunities are no less profound.  We are inheritors of the greatest scientific and technological knowledge in human history.  With advances in information and communications technology, public health, agronomics, earth sciences and other areas, humanity can accomplish goals that hitherto looked to be out of reach: ending extreme poverty; ensuring universal literacy; providing every child with the opportunity to complete a secondary education; ensuring access to modern energy for everyone.

In 2012, world leaders recommitted to the concept of Sustainable Development as the guiding principle for a new direction that combines the most vital economic, social, and environmental objectives.  The leaders agreed that a new set of Sustainable Development Goals, or SDGs, should be adopted by 2015 to help guide the world on this new course.  They also declared in other forums that 2015 would be the year in which the world finally overcomes persistent divisions to adopt a global framework to control human-induced climate change and finance sustainable development.

The Financing for Development Conference (FfD) will take place in Addis Ababa, July 12-15.  The Sustainable Development Goals are to be adopted at the United Nations in September 2015.  The world’s governments are pledged to adopt a new climate agreement at the 21st Conference of the Parties of the UN Framework Convention on Climate Change in Paris, 2015.

In view of the world’s pressing challenges and the urgent timetable of global diplomacy in 2015, the European Forum Alpbach and IIASA invited a select group of world leaders across the five main sectors of global society (political, business, science, civil society, and the arts) to form a new high-level group, the Alpbach-Laxenburg Group (ALG).  The ALG will give active support to global diplomacy during the watershed year 2015 and thereafter to the implementation of the new agreements.

The Alpbach-Laxenburg Group began its work with a focus on Inequality: the stark fact that large parts of global society are still excluded from the many benefits of our era, and also face the greatest threats from the looming environmental dangers.  We identify three groups in particular: the world poorest people, often forgotten and struggling daily for survival; the world’s women and girls, still facing legal and social barriers to full participation and empowerment; and the world’s young, facing the stark crises of high unemployment and seemingly diminished lifetime economic prospects. Yet the Alpbach-Laxenburg Group also emphasizes that the recent advances in science and technology – most dramatically the information and communications revolution (ICT) – have the potential to empower these groups and thereby promote societies that are fair, inclusive, and with broadly shared prosperity.

We are, in short, in need of a new global path towards sustainable development, guided by the SDGs, and bolstered by the 2015 agreements on finance and climate.  These agreements must be grounded in equality, the fundamental principle embodied in the Universal Declaration of Human Rights that all individuals, of every country, race, gender, religion, and ethnicity, should have the opportunity to lead lives with dignity, opportunity, decent work, and the fulfillment of basic needs.  Success will require the best of our science, technologies, culture, and human values.

The members of the ALG are committed to devote their efforts on behalf of these global objectives, and to work assiduously in their realization.  The ALG includes leaders from all parts of the world, and all segments of society.  They are not only thought leaders in their own respective fields but also members of key global networks of excellence.  The ALG members are also committed to mobilize their respective networks to deepen the global cooperation to achieve equitable Sustainable Development.

The Commitments of the ALG

The European Forum Alpbach, led by President Franz Fischler, is pledged to hosting the ALG in the years ahead, providing a venue, annual forum, and access to European and global leaders.

IIASA, under the direction of Professor Dr. Pavel Kabat, is pledged to mobilizing global systems science, utilizing its own world-class staff, and its worldwide partnerships, to deepen the scientific understanding of sustainable development.

Individual Members will note many specific opportunities for the ALG in the coming months.

Statements of the Alpbach-Laxenburg Group

During the next year, the Alpbach-Laxenburg Group will issue short statements on vital issues.  The first of these will be “Including the Excluded” (tentative title, September 2014).  Other tentative statements include: “Holding the 2-Degree C Commitment” (November 2014),  “Women’s Empowerment and Participation,” (February 2015), “Energy for All” (March 2015), “Education for All” (April 2015), “Financing for Sustainable Development” (June 2015),  “Adopting the Sustainable Development Goals” (August 2015), “Success in the Paris Climate Talks” (November 2015).  These statements will be delivered to world leaders and posted on the ALG website.

H.E. Montek Singh Ahluwalia
Former Deputy Chairman of the Planning Commission for the Government of India

Ian Chubb
Chief Scientist of Australia and Professor of Biology

Wolfgang Lutz
IIASA Program Director for World Population, Founder and Director of the Wittgenstein Centre for Demography and Global Human Capital and Professor of Applied Statistics at the Vienna University of Economics and Business Administration

Andra Rupprechter
Federal Minister for Agriculture, Forestry, Environment
and Water Management of the Republic of Austria

Miroslav Vesković
Rector of the University of Novi Sad; Priority area coordinator of the priority 7- Knowledge Society of the EUSDR (European Union Strategy for the Danube Region); Former president of the Danube Rectors' Conference