All policies aimed at improving human well-being need to be aware of the fact that there is inequality/heterogeneity within human populations. This population heterogeneity can be partly captured in terms of relevant observable characteristics such as age, gender, and level of education. But there always remains some hidden heterogeneity. 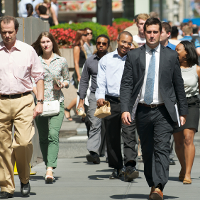 While it seems to be trivial knowledge that not all people are the same in terms of their behaviors and their vulnerabilities, most economic, technological and environmental models make the (over)simplifying assumption of complete homogeneity of human populations. This homogeneity assumption is often unnecessary – because data on the heterogeneous nature of populations exist – and can be grossly misleading in the resulting conclusions and policy advice.

While the notion of heterogeneity as used here is more neutral and analytical in nature, the notion of inequality often refers to the heterogeneity that is also associated with differences in entitlements. Since education can be seen as such an entitlement in its own right and also as a prerequisite for many other entitlements ranging from good health to social empowerment to economic standing, it is appropriate to talk about inequality in education and human capacity (human capital).

An international scientific panel convened by IIASA (and sponsored by UNFPA) in 2011 produced a policy statement (called “The Laxenburg Declaration”) as an input to Rio+20 which was presented to all delegations of the United Nations in New York on October 31, 2011 – the “Day of Seven Billion”. The Declaration states: “The evidence is clear that demographic differences affect people’s contribution to environmental burdens, their ability to participate in sustainable development and their adaptability to a changing environment.  ….these subpopulations are readily identifiable according to age, gender, level of education, place of residence and standard of living.” (Lutz et al., Science 2012, Vol. 335).

Following these insights, IIASA’s World Population Program has recently produced a consistent set of reconstructions (to 1970) and projections (alternative policy scenarios to 2060) of educational attainment distributions (six education levels) by age (5-year age groups) and sex for 195 countries. Unlike other reconstruction efforts, they explicitly account for the fact that fertility, mortality, and migration all vary systematically by level of education.  Through having the full attainment distributions by age cohorts and not just the mean years of schooling these data provide an important portrait of inequality both across and within national populations and there again within and across age cohorts.

The alternative scenarios by age, sex and level of education produced by IIASA for all countries also form the “human core” of the new set of global SSPs (Share Socioeconomic Pathways) that were defined by the international modeling community in the context of climate change to capture the socioeconomic challenges to both climate change mitigation and adaptation.

The empowering effect of education

At the individual level, highest educational attainment is a more stable characteristic than income and it can be more easily and consistently measured and modeled over time. Moreover, there is convincing neurological evidence that education causes lasting changes in the synaptic structures of our brains which influence the way we perceive the environment, think about the future, and behave in reaction to various stimuli. There is clear evidence that formal education enhances abstract counterfactual thinking and tends to lead to more rationality and a longer time horizon. This is why almost universally more educated mothers experience lower child mortality and for both men and women education leads to a higher life expectancy even after controlling for income, quality of health care services, etc. And based on these consistent empirical data by age cohorts, it could be shown that both the level and the distribution of education have significant positive effects on economic growth.

These analyses of inequality/heterogeneity in human populations also relate directly to the Human Development Index being composed of the three components mortality/health, education, and income. While changing levels of mortality and education by age and sex are integral parts of the above described scenarios by age, sex, and level of education, income growth can be derived in a consistent manner through the demonstrated effects of changing age-specific educational attainment distributions on growth (see “The demography of educational attainment and economic growth” Lutz et al., Science 2008; and “Is the demographic dividend an education dividend?” Crespo et al., Demography 2013). These new analyses have already figured in the 2013 Human Development Report and will also be highlighted in the forthcoming 2014 Report.

Illustrating past and future inequalities by age, gender and education

The aforementioned new science-based projections (with the input from over 500 international population experts) by IIASA’s World Population Program provide a set of population scenarios by age, sex, and level of educational attainment for all countries of the world with the time horizon of 2060, and extensions to 2100. The projections were built on the methodological foundation of multi-dimensional mathematical demography developed at IIASA in the early years of the demography group. These new global population projections combine statistical models with expert judgment about the validity of alternative arguments that matter for future trends and with the synthesizing assessments of meta-expert meetings. The outcome of this process in terms of assumptions for overall total fertility rate, life expectancy at birth, and future migration was combined with a careful analysis of historical patterns of educational expansion which led to a statistical model for the formulation of the future educational attainment scenarios at the level of individual countries by POP’s interdisciplinary group. 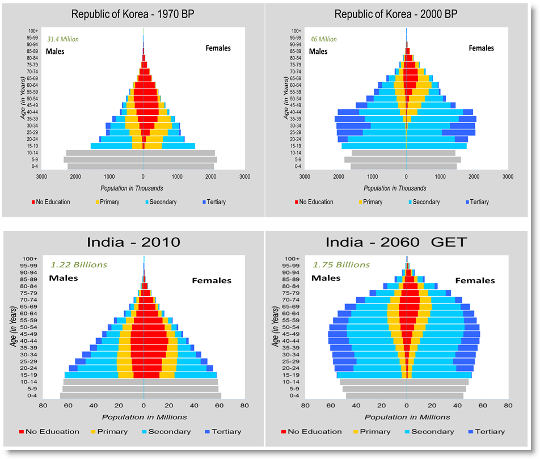 The changing inequality within and across age cohorts: Examples of South Korea reconstructed 1970-2000 and India projected 2010-2060 according to Global Education Trend Scenario (GET). Click on the image to view a larger version.

Examples of the effects of alternative education policies on future inequality

While the projections presented above show the scenario that is considered most likely (SSP2 = Global Education Trend Scenario), there are other SSPs that assume higher fertility, higher mortality, and less education (SSP3, Stalled Development) and, in contrast, low fertility, low mortality, and high education (SSP1, Rapid Development).  The pyramids below show the stunning differences in population size, age structure but, in particular, educational attainment distributions that the two alternative scenarios produce over the coming decades in the case of India. 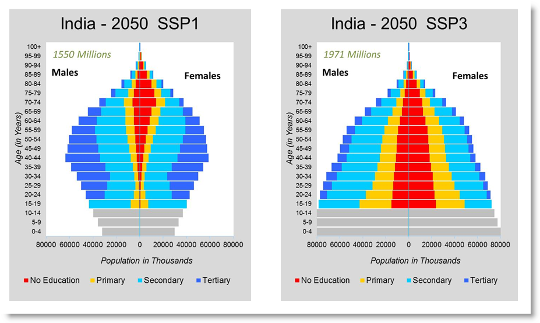 SSP3 shows a young and uneducated India growing to 1.98 billion over the next four decades. Since most of the scenario assumptions (except for mortality) affect younger age groups and the time horizon is only 40 years, the three pyramids are very similar for the elderly populations but differ greatly for the younger ones. SSP1 would lead to an education pyramid by 2050 that is similar to that of South Korea today. The difference in total population size between SSP1 and SSP3 for India alone will be around 439 million by 2050 and increase to 1.56 billion people by 2100, much higher than India’s total population today.

Age and Education pyramids for the world in 2010 and 2050 under SSP1 (Rapid Development) and SSP3 (Stalled Development).

At the global level, SSP1 shows a world that is likely to greatly benefit from the demographic dividend. The age structure is dominated by a large group of highly educated young to middle-aged adults. SSP2, in sharp contrast, will result in a much larger population that is significantly less educated and has many more children to support. The proportion of the total world population that will be below the age of 20 will range from 20 percent under SSP1 to 31 percent under SSP3 by 2050. By 2100, this gap will widen further with only 11 percent in SSP1 being below the age of 20 compared to 29 percent under SSP3. This gap illustrates the universal trend of population aging, in which even under the highest population growth scenario, the proportion of people below the age of 20 will decline throughout this century and be always lower than the current level of 36 percent.

The line charts below show the different trends in educational inequality resulting from the different SSPs. In addition to SSP1-3, that were discussed above, the figures also include SSP4 which reflects strong inequalities in education not only between countries but also within countries. Under such a scenario societies become increasingly polarized with one segment of the population experiencing very rapid increases in high education level (see increases of the blue areas), while at the same time the number of people without education or with very low education increases (see red and yellow area). 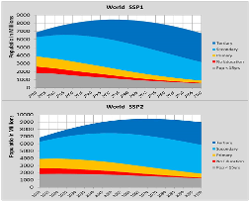 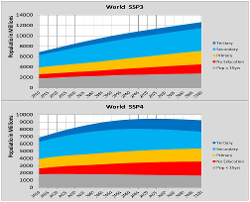