Sir Peter Gluckman is the Chief Science Advisor to the Government of New Zealand and Chair of the International Network for Government Science Advice.

In 2009 he was appointed the first Chief Science Advisor to the Prime Minister of New Zealand, and in 2014, co-chair of the World Health Organization Commission on Ending Childhood Obesity (ECHO). In August 2014, in Auckland, New Zealand, he hosted and chaired the Science Advice to Governments Conference, convened by the International Council for Science (ICSU). It was the first global meeting of science advisors, leading to the foundation of the International Network for Government Science Advice (INGSA) of which he is the founding chair. Since then Sir Peter Gluckman has profiled himself as one of the world’s leading capacities in promoting and advancing global science advice and science diplomacy. In October 2016 he chaired at IIASA the first global workshop of science advisors in foreign ministries. 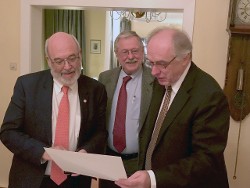 Gluckman is a Fellow of the Royal Society of London, an honor bestowed on just 42 New Zealand-born scientists since the Society's establishment in 1660. In 2001, Gluckman received New Zealand’s top science award, the Rutherford Medal. He is the only New Zealander elected to the Institute of Medicine of the US National Academies of Science and a Fellow of the Academy of Medical Sciences of Great Britain. In 2007 he was made a Knight Companion for services to medicine and was appointed in 2015 to the Order of New Zealand, the highest New Zealand honor. Gluckman received the American Association for the Advancement of Science (AAAS) Award for Science Diplomacy in 2016.