Vladimir Fortov is a renowned physicist, president of the Russian Academy of Sciences, and former Deputy Prime Minister of Russia. His work has helped define modern physics and engineering. 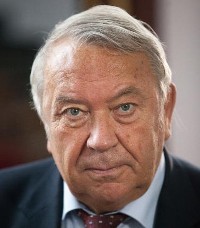 Fortov’s work has spanned myriad disciplines, from energetics to extreme states of matter, from high-energy density physics to the science of explosions. He has coordinated fundamental research taking place on space station Mir and the International Space Station, allowing unique experimental investigations into ‘dusty’ or complex crystals.

While much of his work has provided theoretical insight it has also yielded important practical applications. For instance, he supervised crucial work on protection for spacecraft against the impact of dust particles, as part of the French, German, Hungarian, and Russian space project VEGA, which investigated the Halley comet. He was also the chief designer of a high-power magnetohydrodynamic generator— a device that transforms thermal energy and kinetic energy into electricity—with numerous industrial and space-based applications.

Fortov studied physics at the Moscow Institute of Physics and Technology and in 1976 was awarded his PhD "Physics of Strongly Coupled Plasma Generated by Intense Shock Waves" by the Russian Academy of Sciences (RAS). The same year he accepted the directorship of the Extreme Matter Department in the Institute for High Temperatures RAS.

From 1996 to 1998 he served as the Russian Minister of Science and Technology and the country’s Deputy Prime Minister. Among his many accolades, he was awarded the A.P. Karpinsky International Scientific Award in Physics and Chemistry, the P. Bridgeman Prize for Achievements in High Pressure Physics, and the Max-Plank Award in Physics for Pioneering Investigations of Strongly Coupled Plasmas.

He is currently a professor and Head of the Department at the Moscow Institute of Physics and Technology. In 2013 he was appointed vice-chair of the Presidential Council for Science and Education also serves as a member of the Scientific Advisory Board of the UN Secretary-General.

Extreme States of Matter on Earth and in Space

Information on IIASA activities with Russia