Kandeh K Yumkella is the Special Representative of the Secretary-General and chief executive of the initiative Sustainable Energy for All (SE4All). 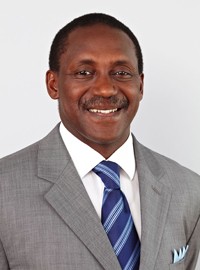 On 24 September 2012, the Secretary-General announced Dr. Kandeh Yumkella’s appointment as his Special Representative for Sustainable Energy for All and chief executive responsible for the planning and implementation of the initiative. Yumkella leads the overall coordination of the initiative and oversees the work of the Global Facilitation Team, as well as operations at various locations, including the Thematic and Regional hubs.

Prior to this appointment, Yumkella served two terms as Director General of the United Nations Industrial Development Organization (UNIDO), first in December 2005 and then upon re-election in 2009. He previously held various high-level positions in UNIDO, including Special Adviser to two former Directors-General and Director of the Africa and Least Developed Countries Regional Bureau. Under his leadership, UNIDO became the largest provider of trade-related technical assistance to developing countries in the United Nations system.

Kandeh Yumkella has also chaired UN-Energy since 2008, convening UN organizations working on energy issues. As its Chairman, he brought a renewed focus to global energy issues and helped to coordinate the UN response to such issues. From 2008 to 2010, he chaired the Secretary-General’s Advisory Group on Energy and Climate Change (AGECC), highlighting the lack of access to energy as a crucial constraint for development efforts. The Group’s report, which was issued in April 2010, confirmed the need to increase energy access, energy efficiency and renewable energy options in order to address the climate change challenge and realize the Millennium Development Goals.

Prior to working for UNIDO, he was the Minister for Trade, Industry and State Enterprises of the Republic of Sierra Leone from 1994-1995. Between 1987 and 1996, while furthering his studies, he held various academic positions at Michigan State University and the University of Illinois.

As a leader in international development cooperation for over 20 years, Yumkella has actively promoted important initiatives and international partnerships for the cause of sustainable development. He is a strong believer that the most effective way to fight poverty is to strengthen the productive capacities of countries and people, enhance their adaptive capabilities to use modern technology, and to commercialize new knowledge.

In 2012 Yumkella formally launched the IIASA coordinated Global Energy Assessment (GEA) at a high-level dialogue session at Rio + 20. The GEA is the first ever fully integrated energy assessment to analyze energy challenges, opportunities, and strategies, for the world’s economies. Conducted by 500 of the world’s leading energy experts in research, academia, business, industry, and policy from the developing and developed world, the GEA is supported by government and nongovernmental organizations, the UN system, and the private sector. The GEA clusters around four topics that are key to the current, much-needed energy transformation: review of major 21st century energy challenges; assessment of current energy technologies; options and pathways to solutions; and policy recommendations and tools to achieve goals. The scientific assessment, writing, and peer review took five years and results were published by Cambridge University Press in a 1882-page book in December 2012.

Sustainable Energy for All Forum

Sustainable Energy For All (SEforAll) Initiative of the UN Secretary-General