In May 2007 the Intergovernmental Panel on Climate Change (IPCC) ask the international scientific community to develop a new set of climate scenarios  for the IPCC Fifth Assessment Report (AR5), expected to be published in 2013/2014.

The new scenarios are called the Representative Concentration Pathways (RCPs).

Four RCPs based on different radiative forcing levels were chosen from the literature. One of these  was developed at IIASA using the MESSAGE model.

The RCP database, which documents the emissions, concentrations, and land-cover change projections based on these four RCPs, is intended to provide input to climate models.

They will also facilitate and expedite future climate change assessments across the integrated assessment community.

About the RCP database

The RCPs, which replace and extend the scenarios used in earlier IPCC assessments, are compatible with the full range of stabilization, mitigation, and baseline emission scenarios available in the current scientific literature. The RCP levels chosen, a brief description, a reference to the underlying publication, and the modeling tool used are shown in Table 1 below.

How the RCP database works

The database, which was first released in May 2009, includes harmonized and consolidated data for the four RCPs, comprising emissions pathways starting from an identical base year (2000) to 2100. The database covers emissions of well-mixed greenhouse gases (GHGs) such as carbon dioxide, nitrous oxide and fluorinated gases at the level of five world regions and short-lived GHGs as well as radiatively and chemically active gases (black and organic carbon, methane, sulfur, nitrogen oxides, volatile organic compounds, carbon monoxide and ammonia) in addition to spatial patterns.

Radiative forcing and concentrations of GHGs are given for the RCPs up to the year 2100, and are extended for climate modeling experiments to 2300. Wherever available, historical information is provided back to the year 1850. The data, verified for quality and consistency, can be downloaded in various formats, including Microsoft Excel, scalable vector graphics, and netCDF format, free of charge at the IIASA Web site, subject to provision of an e-mail address. The RCP database was developed by the Energy Program and Transitions to New Technologies Program at IIASA.

"Radiative forcing is a measure of the influence a factor has in altering the balance of incoming and outgoing energy in the Earth-Atmosphere system and is an index of the importance of this factor as a potential climate change mechanism," according to the IPCC. It is expressed in watts per square meter (W/m2).

Variations in the sun's output, polar ice, and natural events like volcanic eruptions influence the Earth’s radiative balance, as do human activities that result in, for example, greenhouse gas emissions, pollution, and deforestation. Changes in the resulting radiative forcing level are measured at the top of the atmosphere and calculated by subtracting the energy radiating out from Earth from the energy flowing in and comparing the result against the IPCC base year of 1750 before the onset of the industrialization, where radiative forcing is assumed to be zero. If the level of radiative forcing varies from zero, then some warming or cooling is occurring. Scientists can directly measure the amount by which the Earth’s energy budget is out of balance and calculate the effects that this could have for a range of human and environmental indicators. The four different RCPs were developed to represent the world at different forcing levels in the future. Radiative forcing leading to 8.5 W/m2 in 2100, as studied by IIASA using the MESSAGE model, is the high end of the radiative forcing range being used. 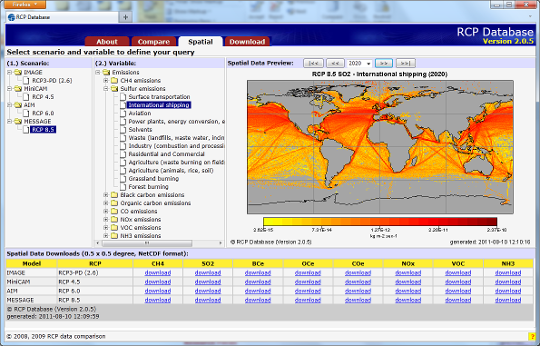 The main challenge in the RCP modeling process is to expedite the research process for AR5 and beyond. For the IPCC Special Report on Emission Scenarios (SRES), published back in the year 2000, four alternative scenario families were developed, characterized by socioeconomic storylines that assumed different directions of future development. The resulting climate scenarios were then applied to impacts, adaptation, and vulnerability (IAV) research. This sequential approach—from socioeconomic factors and emissions, to climate projections, and finally to impact assessment—became time-consuming. Now the RCPs are identified "up-front," and the climate modeling community is able to proceed with new climate change projections at the same time as new work is being carried out within the Integrated Assessment Modeling (IAM) and Impact, Adaptation, and Vulnerability (IAV) communities.