The art of knowing and doing.

Hardware
Manufactured objects (artifacts).
Software
Knowledge required to design, manufacture, and use technology hardware.
Orgware
Institutional settings and rules for the generation of technological knowledge and for the use of technologies. 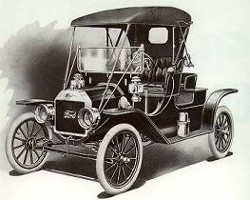 More than 15 million units were produced between 1908 and 1926, the second largest production run (next to the Volkswagen Beetle) of any model produced to date. Standardization combined with new manufacturing methods (i.e., This pattern of cost reductions with stepped-up (accumulated) production volumes is frequently referred to as "learning" or "experience" curve (see example below); a good example of a positive feedback loop or of so-called "increasing returns". Higher wages and lower costs provide another example of a positive feedback: automobile (like other factory) workers could become car owners too, thus further enlarging the potential market for automobiles. Mass production and mass consumption thus go hand in hand, as do their negative impacts: increased work monotony and time pressure at the assembly line; increased congestion, and emissions from denser car traffic on the road.

Price of Ford Model T 1909 - 1923 (in constant 1958 US$) versus cumulative units produced (learning or experience curve). On average, for each doubling of cumulative production, prices dropped by 15 percent. Source: W.J. Abernathy and K.Wayne. Limits of the learning curve. Harvard Business Review, September - October 1974.

An example of a standard: where to drive.

Standards like on which side of the road to drive, traffic signs, automobile saftey and environmental standards, etc. are indispensable for the use and operation of technologies.

Early decisions are long-lasting, and costly to change. The legacy of British colonial rule is clearly discernible on the map. Few countries changed their standard from left- to right-hand-side driving because of the costs involved. (Austria and Italy even maintained both standards for a transitional period in the 1920s and 1930s). Technology systems frequently "lock-in" early-on in particular configurations that subsequently may turn out to be suboptimal. Pioneering conceptual and modeling work on this topic was done at IIASA in the early 1980s by Brian Arthur and Yuri Ermoliev.

Technological change is has four properties: it is uncertain, dynamic, systemic, and cumulative.

None of them was successful. The problem eventually was solved not by an incremental technological "add on" but by a radical systems change: the replacement of wood- burning steam with diesel and electric locomotives.

“Evolution is the result of a sequence of replacements.”
E.W. Montroll

Change occurs through the introduction of new technologies and the continuous modification of existing technologies. Inducement mechanisms are diverse, responding to both supply (e.g., discoveries via scientific research, applied R&D) and demand (e.g., market or social demands such as environmental regulation) factors.

Moore's Law of increasing complexity of integrated circuits is illustrated for dynamic random access memories (DRAMs). Memory size (bits per DRAM) of new DRAM generations introduced doubles every 18 months, and average memory size sold doubles every 21 months. This is in agreement with a trend first suggested by Gordon E. Moore in 1965. Moore's "Law" is a classic case of a self-fulfilling prophecy. Because of widely shared visions of where the industry has to go - for example, in the form of future technology "roadmaps" and vigorous R&D efforts to realize these visions - Moore's "Law" has now held now for over 30 years through powerful DRAM generations. How long this trend can continue is uncertain in view of given the ultimate physical and economic barriers as well as the emergence of new technological alternatives.

“Add as many mail coaches as you please,
you will never get a railroad by so doing.”
J.A. Schumpeter

“Unlike resources found in nature, technology is a man-made resource whose abundance can be continuously increased and whose importance in determining the world's future is also increasing.”
C. Starr and R. Rudman

Technological change builds (non-linearly) on previous experience and knowledge and can thus exhibit increasing returns - the more you learn, the more you know.

Improvements in costs of photovoltaic cells in Japan as a function of cumulative expenditures in R&D as well as manufacturing and niche market applications ("learning by doing", “learning by using”). Research in this area is done in cooperation with Chihiro Watanabe at the Tokyo Institute of Technology. For further information, see a recent TNT paper; for the data in electronic form, see:data and data description.