IIASA World Population Program Director Wolfgang Lutz was elected as deputy member to the Senate of the Leopoldina, the German National Academy of Sciences. 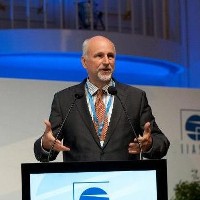 IIASA World Population Program Director Wolfgang Lutz has been elected as deputy member to the Senate of the  Leopoldina, the German National Academy of Sciencies. As a deputy member, Lutz will represent the Austrian members in that governing board of the world’s oldest academy of sciences.

Founded in 1652, the Leopoldina covers scientists in the entire German speaking world. More recently it expanded membership to the entire world and in 2008 it was  appointed as the German National Academy of Sciences. Currently counting over 1,500 members in around 30 countries, the Leopoldina is the largest academy in Germany.

Lutz first became a member of the Leopoldina in 2013.