IIASA’s World Population Program and the University of Shanghai agreed to closely work together in establishing the Institute for Asian Demographic Research in Shanghai. 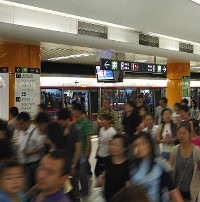 On July 1, 2015, IIASA’s World Population Program and the University of Shanghai, China, formally agreed to establish the Institute for Asian Demographic Research in Shanghai which should also act as the headquarters of the Asian MetaCentre for Population and Sustainable Development Analysis.

The new initiative is inspired by the fundamental demographic and socioeconomic changes that have been experienced by China and other Asian countries over the past decades and the absence of a research institute that comprehensively addresses these changes in a comparative manner.

Formal demography will be at the core of the scientific foundation of the institute. Building on the methods of multi-dimensional demography it will study population dynamics by age, gender, education, rural/urban residence, household status, and health condition. These formal models cater for a wide range of policy relevant topics in population research and population-economy-environment interactions.

The Asian MetaCentre had been established in 2000 as a joint effort of IIASA, the National University of Singapore and Chulalongkorn University in Bangkok where Wolfgang Lutz and Sergei Scherbov also serve as Affiliated Professors. The most recent collaborative project of POP and Asian MetaCenter "Science for Sustainable Coastal Development" focused on strategies for sustainable coastal reconstruction and development after the 2004 Indian Ocean Tsunami disaster and was part of the bigger IIASA study on “Forecasting societies’ adaptive capacity to climate change” funded by European Research Council.

This new initiative will revitalize and broaden the Asian MetaCentre's activities with the focus on organizing relevant workshops, providing training for skills development, engaging in research projects and hosting the MetaCentre website. In this context the institute will closely collaborate with IIASA and the other members of the Wittgenstein Centre for Demography and Global Human Capital (IIASA, VID/ÖAW, WU), the National University of Singapore (NUS), Chulalongkorn University, the National Center for Atmospheric Research (NCAR), Australian National University and other relevant centers.

On January 12, 2015, World Population Program Director Wolfgang Lutz was awarded the title of Honorary Professor of the University of Shanghai. He will chair the International Scientific Advisory Board of the new Institute for Asian Demographic Research. 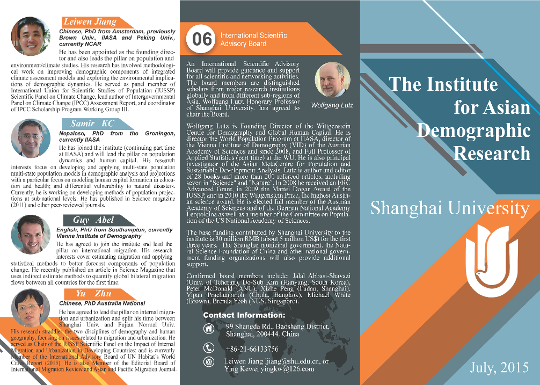 The Institute for Asian Demographic Research

from the World Population Program