The latest Vienna Yearbook of Population Research highlights demographic and socio-economic differentials to the benefit of the international risk, vulnerability and climate change community. 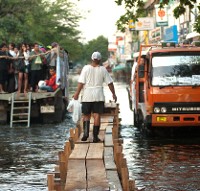 This special issue of the Vienna Yearbook of Population Research is the product of a thematic conference focused on demographic differential vulnerability to natural  disasters in the context of climate change adaptation, organized jointly by the IUSSP Scientific Panel on Climate Change, the College of Population Studies, Chulalongkorn University, and IIASA's World Population Program (POP) in 2014. The seminar was the concluding meeting of an ERC (European Research Council) Advanced Investigator Grant awarded to POP Program Director Wolfgang Lutz in 2008 on the topic “Forecasting societies’ adaptive capacity to climate change.”

Selected conference participants were invited to contribute their on-going research on vulnerability and adaptation to climate change, to take stock of what scientific progress has been made to date, and to discuss priorities for future research. The 9 fully peer reviewed papers are themed around 4 major subjects:

What can demographers contribute to the study of vulnerability?

Anastasia J. Gage
The next best time for demographers to contribute to climate change research

Zhongwei Zhao, Yuan Zhu, Edward Jow-Chung Tu
Daily mortality changes in Taiwan in the 1970s: An examination of the relationship between temperature and mortality

Jacqueline Meijer-Irons
Who perceives what? A demographic analysis of subjective perception in rural Thailand

Raya Muttarak, Thanyaporn Chankrajang
Who is concerned about and takes action on climate change? Gender and education divides among Thais