For her dissertation on the international perspective on aging and cognitive decline, IIASA researcher Daniela Weber will receive the Lower Austria Chamber of Labour Science Prize. 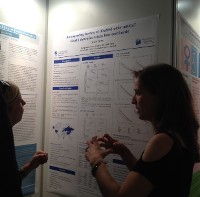 Every year the Chamber of Labour in Lower Austria honors young researchers for their outstanding scientific contributions in the course of their final Master or PhD projects. The prize is awarded based on the significant knowledge gain and new solution approaches provided for social, professional, economic and cultural problems of workers and employees. In 2016, IIASA researcher Daniela Weber was selected as one of the awardees for her international comparison of the cognition decline of elderly people. Weber finished her dissertation in 2015 at the Vienna University of Economics and Business, supervised by IIASA Program Director Wolfgang Lutz and Agneta Herlitz, Karolinska Institutet, Stockholm, Sweden. The award ceremony will take place on 18 October 2016 Lower Austria Chamber of Labour in St. Pölten.

Since 2010, she is working at IIASA's World Population Program, researching on international perspectives of aging and health of population over 50 years, and investigates determinants of cognitive as well as physical aging. Currently, Weber is part of the ERC funded Reassessing Ageing from a Population Perspective (Re-Ageing) project. Among other things, the Re-Ageing project ascertains the extent to which advanced societies are actually aging in multiple dimensions, including health, cognitive abilities, and longevity.