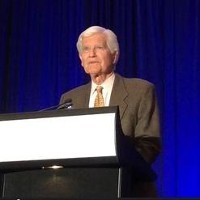 The Mindel Sheps award is given every two years for “outstanding contributions to demographic methodology,” and is the world's highest recognition in formal demography. In 2018, with Andrei Rogers for the fifth time a current or former IIASA World Population Program (POP) scholar receives this prestigious award. This is a "milestone and reflects the Institute's importance on the global population scene", said Rogers. Former awardees are current World Population Program Director Wolfgang Lutz (2016), Anatoliy I. Yashin (2012), James W. Vaupel (2008), and Nathan Keyfitz (1976).

At IIASA the first formal population activities began in 1974 and were merged into the Human Settlement and Services (HSS) Program. The main emphasis was on internal migration, and under the leadership of Andrei Rogers, leader from 1974-1983, IIASA became the cradle of the methods of multi-state population analysis.

Rogers accepted the award on 27 April at the Presidential Address and Awards Ceremony at the Population Association of America Annual Meeting in Denver.

IIASA at the PAA Annual Meeting 2018