Population diversity in terms of age, sex, education, and differences in income, behavior, and location can all influence human consumption patterns, and in turn the assessment of their environmental impacts. The Socioeconomic Heterogeneity in Model Applications (SCHEMA) project investigated how these factors might affect patterns of global change. The geographical focus has been on India, a developing country with high socioeconomic contrasts, as a proof of concept. 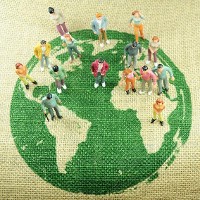 Socioeconomic heterogeneity and its impacts on the environment comes in diverse forms. For instance, income and geographic location can influence people’s choice of cooking fuels and stoves, which in turn drive local pollution, related health impacts, and greenhouse gas emissions. These impacts could well be underestimated if only population averages are considered.

The SCHEMA project led to significant methodological advances and substantive insights in the different IIASA domains tackled by the cross-cutting team. In a first stage, projections of population by state and urban/rural residence and of income inequality based on historical analysis of socio-demographic data, and modified IIASA models to incorporate these primary drivers into the projections of food demand and undernutrition, cooking fuels and related health impacts from exposure to particulate matter (PM2.5) emitted by these fuels (“wellbeing dimensions”). During the second stage of the project, research focused on basic subsistence needs, including clean energy and food access, and related health and environmental impacts.

A tested methodology for propagating socioeconomic heterogeneity across IIASA models

Foundations for the analysis of distributional effects of various drivers of change in the IIASA models has been developed in MESSAGE, GAINS and GLOBIOM. We have created a common layer of socioeconomic data with a largely integrated and partly automated framework to propagate future additions or changes into the IIASA models. Additional methodological novelties have been operationalised for the integration of SEH into the individual model components. This methodology can be replicated in other geographic regions provided the required data are available.

The project has confirmed the importance, and quantified, the influence of incorporating socioeconomic heterogeneity in the IIASA models. Specifically, it was found that using a representative household would lead to several distortions in future projections of the wellbeing dimensions examined (see Fig 1). For instance, in India in 2040, these distortions include: overestimating future food demand and undernourished population by 80 million (Fig 1a); overestimating the share of solid fuel-based cooking energy in India by 13 percent (Fig 1b), and consequently significantly overstating the exposure to household PM2.5 and associated health impacts (Fig 1c). Due to rapid expected urbanization and income growth and prevailing income inequality, the number in poverty that experience undernourishment and solid fuel use decreases significantly with time. Average national GDP per capita masks poverty levels due to the unequal distribution of income within the country and fails to account for the different levels of uptake of clean cooking fuels in urban and rural India. Consequently, solid fuel use for cooking, and mortality from household air pollution are overestimated in calculations based on average household characteristics. Similarly, overlooking the urbanisation dynamics biases for instance food security projections, due to the higher prevalence of undernourishment in rural areas.

Beyond quantifying the effects in aggregated results when taking SEH into account, the project also highlighted the important differences in wellbeing indicators between individual socioeconomic groups. All indicators investigated here are severely worse for the low-income population. 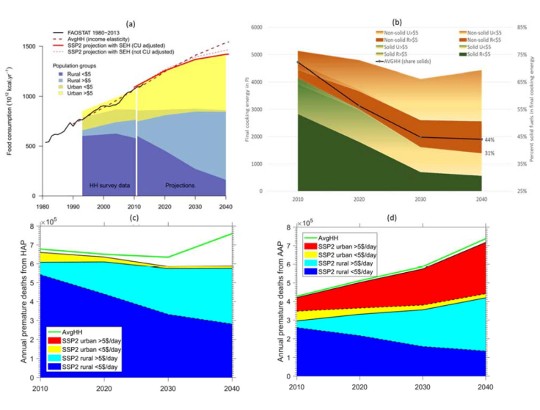 Future scenarios of the chosen wellbeing dimensions were developed based on future trends in the primary drivers. Sensitivities were conducted to test their influence individually and futures scenarios of their co-evolution were assessed using the Shared Socioeconomic Pathways (SSP), which have been developed by and for the climate research community to analyse the influence of socioeconomic changes on GHG emissions. The project eventually enhanced the original SSPs with updated urbanization projections and new income inequality projections.

SCHEMA also demonstrated the influence of different urbanization rates and Gini coefficients on their own, and combined in the SSP scenarios, have a significant effect on the wellbeing dimensions (see Figure 2). This stems from the wide range of possible income distributions resulting from the combination of a wide range in GDP growth rates and different levels of income inequality and urbanization. The sensitivities show that solid fuel dependence and undernutrition levels are bounded by extreme urbanization scenarios. Air pollution impacts are influenced by the interplay of emissions, demographic factors such as age structure of the population, and vulnerability. High urbanization leads to reduced mortality from household pollution but puts more people at risk from high ambient concentrations of PM2.5.

As expected, an equitable world (SSP1) shows the best progress in all wellbeing dimensions, while SSP3 (a relatively unequal world) has the poorest performance.