People unable to escape from poverty without external help are caught in what’s commonly termed a “poverty trap.” Even people who are not extremely poor can be forced into a state of inescapable poverty by extreme events like floods or drought. Disaster microinsurance can offer resources for poor households to overcome the immediate impacts of natural disasters, but recent IIASA research shows that microinsurance, when integrated with additional adaptive measures, is much more effective than microinsurance alone in preventing people from falling into a poverty trap in the first place.

Natural hazards such as earthquakes, droughts, and floods can cause devastating environmental and socioeconomic losses for all whose lives are touched by them. But nowhere are their impacts greater than on the poor. Having low-quality housing heightens poor people’s physical vulnerability; it exposes them to the elements or forces them to use temporary shelters. Having no savings to draw on and an inability to raise credit to rebuild their lives also explains why their coping capacities are so limited in such events. One only has to compare the average number of fatalities per disaster event (see chart, page 17) for high- and low-income country groups during the recent past to see how vulnerable the poor actually are.

There is growing awareness not just of the large direct impacts of natural disasters, but also of the indirect long-term effects of such shocks on households and livelihoods. As evidence and model-based analysis are limited, IIASA has recently begun to study this issue at the local level, with a key focus on South Asia, one of the most disaster-prone regions in the world. This work aims to make better understood the causes and cures of poverty that has been exacerbated by disaster. 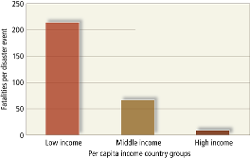 Fatalities per disaster event in low-, middle-, and high-income country groups between 1980 and 2004 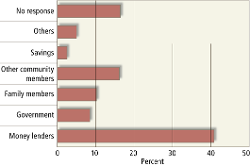 IIASA researchers and collaborators have recently surveyed more than 320 households in Uttar Pradesh, India. This is one of the largest and poorest states in India, and faces a multitude of climate hazards. Among the households surveyed, 53 percent were living below the poverty line as defined by the Indian government, while 69 percent of households had a least one outstanding loan and a quarter of households had no savings. During the 1998 flood in Uttar Pradesh, losses affecting all income groups (very poor, poor, middle-income, and rich) totalled 43 percent of total annual household income, but the very poor experienced losses of more than 70 percent. Household income provides the initial and obvious source of money to rebuild lives after a disaster event, but of all the households affected by flood, 73 percent reported that this was not enough to allow them to cope.

Another IIASA study investigated the riverine islands (chars) of north-western Bangladesh, home to the poorest and most vulnerable communities in the country with over 80 percent living in extreme poverty. The chars are exposed to frequent flooding. Says Reinhard Mechler, one of the study’s authors: “A key driver and consequence of poverty here is inadequate and disaster-prone housing, coupled with a lack of means for rebuilding safer homes. Flooding also creates further negative impacts. For instance, there is a close correlation between flooding and the incidence of water-borne diseases like diarrhea and dysentery.”

Sources of funding during and after disasters in such contexts are generally very limited, with households in Uttar Pradesh turning to moneylenders, the community, or family members for financial help (see chart above). Very few have savings and, while 15 percent of those surveyed had some kind of insurance, primarily life insurance, nearly all respondents were unaware of any insurance schemes to cover disaster losses. IIASA’s Dr. Stefan Hochrainer-Stigler, another author of the study comments: “Borrowing is one of the most important options poor people have for recovery, but owing money can seriously affect people’s future coping capacity and potentially lead them into a poverty trap.”

The Cancun Adaptation Framework, established by the 2010 UN Climate Change Conference highlighted the pressing need to find ways to help the world’s most vulnerable people face the inevitable consequences of climate change—including weather shocks. Preparations for Rio+20, the United Nations Conference on Sustainable Development, emphasize “natural disasters and the ability to prepare for and recover from them” and “increased resilience at the national and global level” as two of the most important global emerging challenges.

Interest continues to grow in disaster microinsurance as a means of providing the necessary resources for households to overcome natural disasters. Particularly in South Asia, creative alliances among NGO/community groups, microfinance organizations, rural development banks, government regulators, entrepreneurs, and international financial and donor institutions have been pioneering options such as microfinance and disaster microinsurance products targeted directly at the poor.

A recent joint report by IIASA and the All India Disaster Management Institute carried out the first large empirical cross-country assessment of the impact of disaster microinsurance in South Asia. Based on a survey of more than 2,000 insured and non-insured householders, researchers assessed the impact of microinsurance products on disaster-prone communities. Among many results, the study found that insured households were more likely to be better prepared for disasters—for instance, insured families reinforced their homes to help them withstand future shocks—than households without insurance. Yet, interestingly, this empirical study did not find significant improvements in individual welfare—measured through levels of savings and debt over the last few years—for households with insurance compared to those without. Why is this?

The lack of increased wellbeing for those with insurance shows the importance of considering a more comprehensive adaptation package. A recent model-based analysis of the costs and benefits of adaptation in Uttar Pradesh suggests that the highest societal benefits are achieved through an integrated strategy combining microinsurance with physical adaptation measures. As Dr. Hochrainer-Stigler explains: “Our findings suggest that in Uttar Pradesh the most effective way of coping with drought is both by irrigating the fields to reduce the risks from commonly occurring, less-serious droughts and purchasing micro-insurance to cover losses from rare but catastrophic droughts.”

Thus, according to IIASA research, although disaster microinsurance can provide resources to offset immediate needs in disasters, it needs to be coupled with other risk reduction options to help ensure that disasters affect the poor less in the long term. More work combining empirical with model-based assessments is under way to provide further insights into and options for tackling disaster-induced poverty traps and preventing more families from falling into them.