Options - Winter 2011/2012. IIASA analysis has supported the Mexican government in trying to identify how best to prepare financially for a major natural disaster. 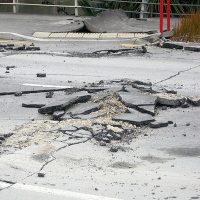 In 2006 Mexico became the first transition country to transfer part of its public-sector natural catastrophe risk to the international insurance and capital markets. This decision came just over 20 years after the 1985 Mexico City earthquake had highlight the shortcomings of after the-event approaches for coping with disaster and associated losses.

Mexico adopted its new approach with support from an IIASA analysis of the different options for risk financing. More than 9,000 people lost their lives in the 1985 Mexico City earthquake and estimates put the direct economic cost of the disaster at about $8 billion (in 2010 prices). Lying as it does within one of the world’s most active seismic regions and in the path of hurricanes and tropical storms, Mexico’s population and economy are highly exposed to natural hazards such as earthquakes, droughts, hurricanes, mudslides, and volcanic activity. Severe natural disasters (the type likely to occur infrequently but at reat cost) represent large fiscal liabilities for the Mexican government. Hence, momentum gathered through the 1990s for the Mexican federal government to respond to this challenge. Initially, in 1996 the authorities established a special Natural Disaster Fund allocation in the federal budget called the “Fonden.” But the series of natural disasters that has occurred in Mexico in recent years has forced the government to look at alternative insurance strategies.

“From 2000 the Mexican government began collecting data to assess the exposure of its assets to losses from earthquakes and to analyze different financial instruments that could be used to transfer the risk to the markets,” explains Victor Cardenas who worked at the Mexican Ministry of Finance at the time and currently is a catastrophe risk financing expert. 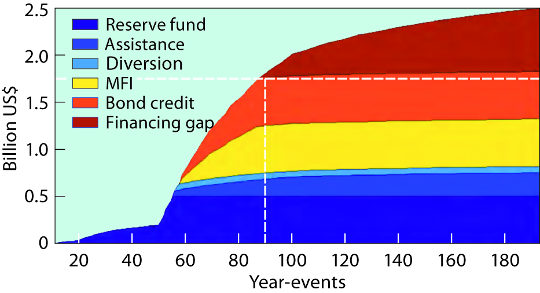 ASSESSING MEXICO’S FINANCIAL VULNERABILITY TO EARTHQUAKES The graph, generated by IIASA’s CATSIM model, identifies the costs of disasters to the public sector for earthquakes of varying magnitude (presented as one in 20, 50, 100, and so on year-events). The colored areas show the available financing sources for rebuilding infrastructure and providing disaster relief to citizens. These sources comprise a government reserve fund (FONDEN), international assistance to be provided by the international community, budget diversion, and domestic credit via government bonds. The analysis suggested that beyond an amount of approximately $1.7 billion, which corresponds to an event with a likelihood of occurring once in 91 years, the government would be unable to finance these contingent liabilities, and this is shown as the financing gap.

In 2004 the Ministry of Finance began working with IIASA to examine the economic costs and benefits of investing public resources in two risk transfer instruments—reinsurance (where reinsurers hold sufficient reserves to meet claims in the event of disasters and typically transfer a part of their risk to other companies) and catastrophe bonds. Cat bonds, as they are also known, allow the investor to receive an above-market return when a specific catastrophe does not occur, but the investor must share the insurer’s or government’s losses by sacrificing interest or principal following a disaster event. Unlike reinsurance, post-event payments do not stem from insurance company reserves but from global capital markets.

Analysis of these two instruments was informed by IIASA’s catastrophe simulation model (CATSIM) which provides a stylized interactive model-based framework to assist public policymakers of exposed and vulnerable countries to design ex ante risk financing strategies. As Cardenas points out: “For Mexico, CATSIM provided a clear picture of the different layers of risks posed by earthquakes to the public finances and helped identify which risks could be transferred to the international market at an acceptable cost.”

Using CATSIM and other detailed information, analysts examined the relative merits of reinsurance as opposed to catastrophe bonds. While they are to some extent substitutable options for transferring sovereign disaster risk, there are differences in terms of their cost and credit risk. The interactive

CATSIM tool gave the Mexican authorities the opportunity to look at different assumptions and parameters regarding risk financing alternatives, and inform the decision taken in 2006 to issue a catastrophe bond to cover the risk of a really major earthquake event.

Further catastrophe bonds were issued in 2009 that also covered risks from major hurricanes. Have cat bonds proved a success?

“Fortunately, Mexico has not experienced a major disaster in the areas covered by the bonds,” says Cardenas. “However, the attractiveness of the bonds for international investors was so great that they were oversubscribed, which has ensured that the premiums the government pays on the bond are below the market average for other cat-bond market players.”

As a result, Mexico’s experience could set an important precedent for protecting highly exposed developing and transition country governments against the financial risks of natural catastrophes. +