November, 2012: A Q&A with IIASA’s Anatoly Shvidenko on heat, fire and climate change in the Russian forests 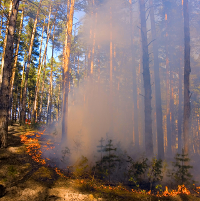 In the summer of 2010, IIASA forestry expert Anatoly Shvidenko was grimly following news of the unprecedented heat wave and thousands of forest fires that were ravaging his native Russia.  The heat wave was routinely pushing temperatures to more than 30-35 degrees Celsius in what scientists were calling a “black swan” event – an unexpected and extreme occurrence of enormous magnitude.  The fires were burning many hundreds of thousands of hectares for boreal forests and blanketing major cities, including Moscow, in thick layers of smoke.

“It was a catastrophe inside of Russia,” Shvidenko says now as he sits in front of a large map of Russia in his IIASA office.  In Moscow, he says, temperatures soared for almost three months and, “there was no rain.  Nothing. I don’t remember exactly how many people died, but in Moscow, in hospitals, there were not enough places to put the dead bodies.  That is a fact.”

Shvidenko is perhaps the world’s leading expert on the boreal forests that cover much of Russia.  In the summer of 1959, after graduating from the National Agricultural University of Ukraine with a degree in forestry, he began his career by doing forest inventory in the remote Manoma River basin in the Russian Far East.  After several years, he moved on to the Sakhalin Forest Research Station on Sakhalin Island, and then to the Dolinsk State Forest.  He then became a professor and head of the Department of Forest Inventory and Mathematical Modeling at his native university, and eventually the director of the All-Russian Scientific Research and Information Center for Forest Resources in Moscow.

Shvidenko has spent much of his life living and working in the Russian forests, but in the summer of 2010 he could do little more than watch as the trees burned.

In a recent discussion at IIASA, he talked about the forest fires and why, given what the United Nations Intergovernmental Panel on Climate Change ( IPCC ) and IIASA models predict about climate change, such fires are likely to increase significantly . 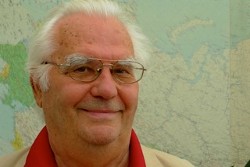 Q—Forest fires were severe throughout the northern hemisphere in 2010.  Why were they even worse in Russia?

AS—During the last 30 years the rate of warming for the Russian territories has been three times higher than the average global warming increase.  That period has seen a 0.51 degrees Centigrade temperature increase per decade in Russia, compared to 0.17 degrees per decade globally. The warming is substantial and what is interesting is there is a trend for the dryness of the climate to increase in major parts of the territories.

But most dangerous are years with catastrophic fires. Such fires took place in Russia in 1998, 2003, 2008, 2010. For instance, eight years ago there were huge forest fires in Russia, mostly in Siberia, with almost 20 million hectares burned, three or four times the total forest area in Austria.  What happened? A really early spring and the snow was melting while the ground was still frozen, so the water went away. Then there were three months or so of very low precipitation, and then there were huge fires.  Thus, the seasonal weather was the major driver, however insufficient forest fire protection also substantially contributed. The situation in 2003 was even more difficult than in 2010, but it occurred in the remote taiga territories and the smoke did not reach Moscow.

AS—Saying about the past and present, definitely yes, but the future of the problem is not completely clear. As a scientist I believe the IPCC climate change scenarios are based on the best current knowledge.  If you ask me one hundred percent do I believe in the forecasts we have from these huge models, I would say they are very probably right.  All of these models explain a lot, but not everything.  We try in our work to include uncertainty, but you cannot strictly define a “reliable range” of uncertainty.  It is extremely important that the probabilities of the IPCC say “likely” or “very likely.” Anyway, all models which are based on the GCMs (Global Circulation Models) predict substantial acceleration of fire regimes over the entire boreal belt including Northern Eurasia, Canada, Alaska.

Q—Much of the climate change discussion is now focused on limiting the overall increase in global temperature to 2 degrees Celsius to avoid even more severe extreme events.  Is that realistic?

AS—You know, it will not happen.  In order to hold warming by the end of the century to just 2 degrees C, we’d have to stop the current emissions now.  And even that is too late.  That [limiting emissions to current or lower levels] will very probably not be done until 2050, if even then.

If we have by the end of this century a rise of plus 4 degrees C globally, then in vast parts of Russia we will have to expect between 7 and 12 degrees C in the increase of the annual average temperature.

Q—What are the implications of such an increase?

AS—The current tendency to increase dryness will be huge in major continental territories of Russia.  And one question that comes from that is two-thirds of this territory is permafrost, and if permafrost goes down, you are left with a substantial part of these territories with sandy soil. Today in a huge part of Siberia we have between 200 and 300 millimeters of annual precipitation, compared to Florida in the US which has probably 2000 to 2500 millimeters.  Based on the amount of precipitation, northern Siberia is a real semi-desert and we have a large number of bogs and forest there only because low temperature limits the evaporation and the permafrost takes in this water and holds it.  If this goes down, we will have a substantial increase in aridity.

There is a second point that, if it is true, would be better not to believe.  One of the 15 indicated global tipping elements are boreal forests. If we substantially change the climate, let’s say over the threshold of about 7 degrees Celsius above the average annual temperature, we will have a nonlinear, very strong reaction of boreal ecosystems.  That means we will have huge mortality in the forests, even without any fires, because these trees evolutionarily have developed under a stable cold climate.

Q—Can this be prevented through forest management or other practices?

AS—Yes, this is difficult but possible. Russia has to develop an anticipatory strategy of adaptation of Russian forest and forest management to climate change. This is a long-period, labor and resources consuming activity.

Of course, you also can note the importance of uncertainty.  I’d like to give an example. Recently there have been two forest vegetation models developed, one in Siberia and the second in America.  The Siberian model indicated that by the end of the century about 30 percent of the Siberian forests will die because the climate is changing.  The south will have high temperatures and not enough precipitation.  In the north, it will be warmer and maybe enough water, but the forest won’t be able to move (to the shifting climate zones) with the speed it needs.  The forest can move 200, maybe 300 meters per year.  That means if it is 200-500 meters a year, in 100 years the forest can only go up to 50 kilometers.  But the temperature will rise much faster, so the forest will not be able to move north fast enough and it will die in the south.  We will lose those forests.

The American model we used for looking at a smaller territory because it is very accurate and detailed.  We don’t get this catastrophic feature.  A little less productivity, less coniferous species, more fragmentation, yes, but it will not be a catastrophe.

Q—Then there is room for optimism in some of the modeling?

AS—Neither of these models can include all possible nonlinearities. Very probably it will be better if we are clever people and there is the cautionary principle: be prepared.  The probability of disaster is high. And remember that there is a relatively small probability that it will be something different than what the models predict as most likely.  It would be good if the IPCC and big science could predict much more accurately, but that will take a substantial period of time.

Q—The trend in all of the modeling, even the ones not predicting a catastrophe, seems to be that we are edging toward tipping points, toward bad responses from ecosystems.

AS—There is a substantial difference between short period forecasts and long period forecasts.  If you are talking about the next 20 to 30 years with the forests globally, then if will be mostly a positive or neutral impact dependently on geographical location and specific sites.   Not everywhere, but overall.  But if you are going beyond 2050, it will not be good anywhere in the boreal zone.  That is if you believe the IPCC predictions are reliable enough, and we believe they are.

Q—When you go back to the forests, to where you started, can you see the changes?

AS— Not only climate causes the changes. Definitely, still the most impressive impacts are provided by humans, particularly during the last 20 years transition period in Russia. The most dramatic changes are to the thousands of forest settlements that were based on the forest sector as it was under the Soviet Union. Thousands of forest industry enterprises have been closed.

I started as a forest inventory professional in 1959, and about 10 years ago I came to the place in the Russian Far East forests where I started my first season.  When I came to this area during the Soviet era, there were two huge forest industry complexes, they harvested more than two million cubic meters of wood per year, and there were at least 5,000 people there.

When I came to this place after 40 years, everything had been destroyed.  The forest industry is was just two small groups that harvested two to three thousand cubic meters per year—much less than one percent of what was once done.  In territories where impressive virgin kedar forests grew, a substantial part of the forest landscapes are currently covered by unused secondary birch stands. The village of Manoma had about 500 inhabitants who were mostly jobless people with many alcoholics, ill people, or invalids.  There were only about 80 jobs, a school, and a small hospital. They did what you have to do in this country to survive; poach fish, harvest different berries, grow potatoes and hunt.  This is rather south in Siberia so they could also have gardens.  I cannot say they lived like a century ago but the picture was sad.

There are some positive economic changes, but they are very slow. Forest management in Russia is in a deep crisis, and there are not too many optimistic expectations for the near future.