December 2013. Options Magazine, Winter 2013/2014
An IIASA study combines experiments and modeling with practical action to help cut pollution that is contributing to a warmer Arctic 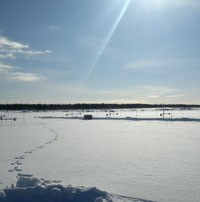 In September of 2012, the thick blanket of ice that covers most of the Arctic Ocean had retreated to just a little over half its average minimum extent, hitting a new record low. Meanwhile Arctic temperatures have risen on average 4°C over the last 100 years, almost twice as much as at lower latitudes.

Scientists say that the warming of the Arctic is primarily caused by climate change from carbon dioxide, which remains in the atmosphere for decades to centuries. However, shorter-lived greenhouse gases and air pollutants including methane and black carbon also contribute to the warming—making them attractive targets for mitigation efforts that have immediate impact and can complement reductions in CO2 emissions. 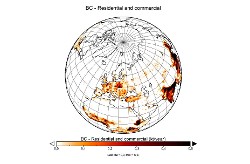 “We might not be able to stop the warming of the Arctic. But there are things we can do to make a difference in how much it warms and how soon,” says IIASA researcher Zbigniew Klimont. Over the last several years, Klimont and colleague Kaarle Kupiainen have collaborated with Arctic policy and science efforts such as the Arctic Council and the Arctic Monitoring and Assessment Program (AMAP) to look at how warming could be reduced in the region. Their latest project, called “Mitigation of Arctic warming by controlling European black carbon emissions” (MACEB), recently completed, homed in on one Arctic country: Finland. It combined emissions modeling with experimental work and a practical on‑the‑ground outreach component, to provide a better understanding of what can be done to limit future warming.

From global research to local action

Previous research by IIASA and other groups had already shown that cutting black carbon—soot—could quickly and cheaply make an impact on climate warming. While the dark-colored particles have a strong warming effect, absorbing heat both in the atmosphereand on the surface of snow and ice, the pollutant doesn’t last long in the atmosphere.

But those studies made only broad, global predictions. “In a lot of these large scale and global climate models, the resolution is too coarse to answer these regional questions,” saysKlimont, one of the MACEB study leaders. “The question is: Can we do something with mitigating black carbon to reduce the impact of warming in the Arctic?” To answer that question the research team, which included IIASA, the Finnish Meteorological Institute, the University of Helsinki, and the Finnish Environmental Institute, decided to take on thebiggest source of black carbon in the country—the wood burning stoves that many Finnish people use to heat their homes and saunas. “We used Finland as a sort of case study area,” explains Kupiainen. Interviews with chimney sweeps had confirmed that many Finnish stove owners make mistakes in their operation that lead to more pollution. “If you make the normal so-called user errors, your stove can release as much as triple the black carbon emissions” says Kupiainen.

So the project also included a public relations campaign to teach people how to better operate their stoves. Klimont says, “This was a practical attempt on the ground. The chimney sweeps essentially went out as missionaries, with pamphlets to teach better stove operation.” The researchers expect to evaluate the impacts of this effort as part of future projects.

The study also included experiments to measure how much black carbon contributes to snow melt. University of Helsinki researchers designed a soot blowing machine that could disperse soot over areas of snow, where they then measured the change in albedo (reflectivity) and snowmelt under varying conditions. They also took measurements at five locations around Finland—data that were used to validate the emissions models.

Including more detail on regional emissions into IIASA’s GAINS model, a model of greenhouse gas and pollution emissions that covers the entire globe as well as specific regions, Klimont, Kupiainen, and experts from the Finnish Environment Institute (SYKE) were able to refine themodel to better show where black carbon emissions were coming from in Finland. The project also for the first time included detailed temporal data on residential combustion emissions—since people tend to use their stoves more in winter, the emissions are greater during that time of year.

The information and new experimental data produced within MACEB helped improve parameterization of a climate model from the Finnish Meteorological Institute and led the team to reestimate the transport of and deposition of black carbon in the Arctic. The new data bring better estimates to the influence that black carbon has on Arctic warming. For example, a recent article in the journal Atmospheric Chemistry and Physics showed that when they included temporal variation in their emissions model, the contribution of residential emissions to black carbon pollution in the Arctic was greater than previously estimated, better matching the measurement data in terms of absolute values as well as seasonal pattern.

The future of the ice 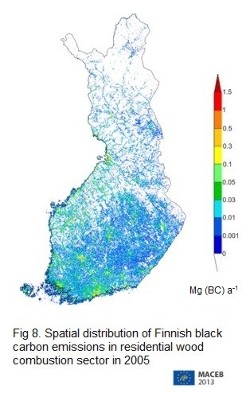 How much can this Finland-focused study say about the future of the Arctic as a whole? Other Arctic countries such as Canada, Russia, and the United States emit larger amounts of black carbon, some of that from oil and gas extraction operations, an activity which is not present in Finland. Nevertheless, the study’s methods and findings could be extended to different regions and different emission sources. Klimont says, “The contribution of Finland to emissions in the Arctic area is not very large—a few percent at most. But our experience can be transferred to other countries.”

The researchers have found an avid audience for their findings among policymakers in Europe—where the next round of air pollution guidelines are currently being negotiated—as well as incircumpolar countries, which stand to be most strongly affected by Arctic warming. Kupiainen says, “Arctic communities are eager to get more data on impacts.”

Read this issue of Options