Check out the latest new findings from IIASA researchers. To receive alerts to your inbox please register for the IIASA Press List. 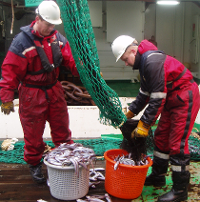 Evolutionary changes induced by fisheries may benefit the fishers, according to a new study published in Proceedings of the National Academy of Sciences. Fisheries-induced evolution leads to faster growth and earlier maturation, which can improve the productivity of fish stocks. But if fisheries are not well-managed, this potential benefit turns into economic losses, as stocks decline from overfishing and further suffer from evolution. With contributions by three IIASA researchers, this study builds on IIASA’s previous work on elucidating the link between fishing and evolution. THIS STUDY IS EMBARGOED UNTIL 3pm EST, 8 July 2013.

Agricultural products imported to Europe accounted for more than one-third of global deforestation associated with international agricultural trade, according to a new report published by the European Commission. From 1990 to 2008, 1.3 million square kilometers of forest was cleared to make way for agriculture, the report shows. While most of this deforestation occurred in South America, Southeast Asia and sub-Saharan Africa and the majority of agricultural products causing deforestation were consumed in the countries of origin, goods consumed in the EU contributed to approximately 90,000 square kilometers of lost forestland—about 7% of the global deforestation resulting from agricultural expansion during this period. More>>

Changes in water availability and water temperature under climate change are likely to lead to higher electricity prices for most of Europe, according to a new study in the journal Environmental Research Letters. Hydroelectric power plants rely on steady river flows, while thermoelectric (nuclear and fossil-fueled) power plants need water for cooling. Projections show that for most of Europe, river flows are expected to decrease and water temperatures to rise, putting pressure on both types of power plants. The largest cost increases are projected for Slovenia, Bulgaria, and Romania, where the study projects that wholesale prices could rise as much as up to 32% by 2031-2060.