Check out the latest new research findings from IIASA on mercury pollution, climate and food production in China, and greenhouse gas emissions. 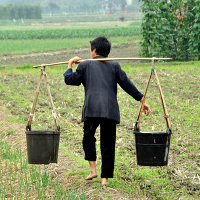 Policies aimed at mitigating climate change would also make a substantial dent in mercury pollution by the year 2050, shows a new study from IIASA’s Mitigation of Air Pollution and Greenhouse Gases Program. The study, published in the journal Atmospheric Environment, uses IIASA’s GAINS model to examine scenarios for future emissions under different policies for climate mitigation and air pollution. It shows that policies that address air pollution alone would not be sufficient to cut mercury pollution, but that addressing climate change and air pollution simultaneously would bring greater reductions than addressing either problem alone. Mercury is a long-lasting trans-boundary pollutant that moves from the atmosphere into water and food chains, damaging human health. The first global treaty on mercury is scheduled for adoption in October 2013.

Rising temperatures will lead to problems for agriculture in China, shows a new study published in the journal Climatic Change. The new research finds that expected temperature rise and precipitation changes will change the optimal growing regions for different crops, reducing yields of major crops such as wheat, corn and rice by up to 12% by 2050. It also shows that climate change will increase the need for irrigation in the country, straining already scarce water supplies. The study shows that adaptive measures, taken soon, could reduce these potential losses.

How much carbon does your country emit?

IIASA has updated its Energy and Carbon Emissions Inventory Database, a comprehensive source of data on energy use, carbon emissions, and energy and carbon intensities both globally and by country for the 27 largest carbon-emitting nations. It combines data from a variety of sources and makes them directly comparable, while also quantifying the many uncertainties in the data. The database is freely available online

“Existing inventories on emissions and energy use are gathered by different organizations, for different purposes, and with different reporting methods,” says IIASA’s Transitions to New Technologies Program Leader Arnulf Grübler. “Our database makes it possible to compare these different estimates.”