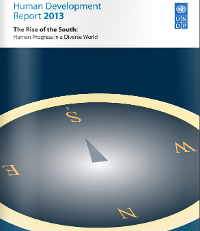 The new report, which will be launched in Vienna on 9 April by UN officials and IIASA’s Wolfgang Lutz, shows a continued rise in living conditions in Africa, Asia, and Latin America. Media are invited to the launch, which will take place from 10:00 to 12:00. More information.

The report examines not only the changes, but also the factors that have driven those changes and could lead to future improvements.

Lutz says, “This series of Human Development Reports has become the most influential publication series in global development. We are very happy to see that our multi-dimensional approach to quantitatively describing the population dynamics by age, gender, health and education has gained such a prominent place. With UNDP we fully share the focus on developing the human resource base for sustainable development."

The demographic projections produced by IIASA in collaborations with the other partners in the Wittgenstein Centre for Demography and Global Human Capital (the Austrian Academy of Sciences and the WU-Vienna)  are unique in that they not only project the number of people in different countries, but also education levels, also considering that life expectancy and fertility differ by level of education. These factors are essential for development, and therefore key for anticipating future societal changes. For example, a growing body of research, from IIASA and other researchers, shows that women’s education is vital for reducing poverty and increasing well-being around the world.

For more information on the report, visit the UNDP Web site.