Policy Brief #16, April 2018. Life expectancy at birth has increased dramatically across the globe. The widely held assumption that health and survival improved due to higher living standards with medical progress also contributing, is being disputed by new research indicating that education in fact drives all these changes. 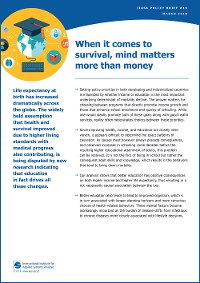 Setting policy priorities in both developing and industrialized countries is influenced by whether income or education is the most important underlying determinant of mortality decline. The answer matters for choosing between programs that directly promote income growth and those that enhance school enrollment and quality of schooling. While one would ideally promote both of these goals along with good health services, reality often necessitates choices between these priorities.

Since improving health, income, and education are closely inter-woven, it appears difficult to determine the exact patterns of causation. As causes must however always precede consequences, and observed increases in schooling come decades before the resulting higher educational attainment of adults, this problem can be resolved. It is not the fact of being in school but rather the consequent adult skills and knowledge, which results in the behaviors that tend to bring down mortality.

The analysis discussed in this brief shows that better education has positive consequences on both higher income and higher life expectancy, thus resulting in a not necessarily causal association between the two. Better education also tends to lead to improved cognition, which is in turn associated with longer planning horizons and more conscious choices of health-related behaviors. These mental factors become increasingly important as the burden of disease shifts from infectious to chronic diseases more closely associated with lifestyle decisions.

IIASA Policy Briefs present the latest research for policymakers from IIASA - an international, interdisciplinary research institute with National Member Organizations (NMOs) in 23 countries in Africa, the Americas, Asia, and Europe. The views expressed herein are those of the researchers and not necessarily those of IIASA or its NMOs.