Global Development: Science and Policies for the Future

Policy Brief #02, December 2007, IIASA Conference '07. At its thirty-fifth anniversary conference, in November 2007, IIASA brought together scientists, policymakers, and thinkers to discuss Global Development: Science and Policies for the Future. The aim was a wide­-ranging discussion of what a sustainable and equitable future might look like, and how to get there. Foremost were research priorities and how IIASA might contribute. 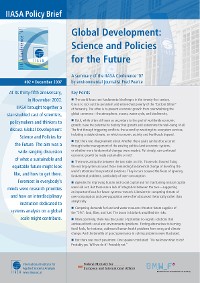