Policy Brief #07 December 2009. This briefing identifies the opportunities, risks, and challenges associated with efforts to expand solar energy capacity in North Africa to the point where it can make a significant contribution toward achieving emissions reductions targets. It is based on collaborative research between IIASA and PIK, the Postdam Institute for Climate Impact Research. 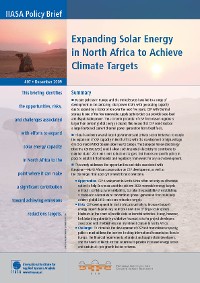