Digitalization will transform the global economy

Policy Brief #20, October 2018. New research has identified several adaptive actions that can both support national economies and prepare countries for a future shaped by digitalization. 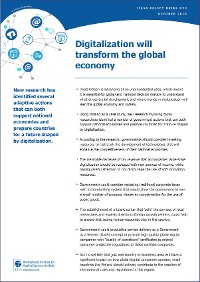 Every day 207 billion emails are sent, 8.8 billion YouTube videos are watched, 4.2 billion Google searches are conducted, and 152 million Skype calls are made. Internet based, digital businesses are expanding at a tremendous pace, with new mobile and intangible digital goods and services becoming available to consumers on a daily basis.
It is clear that digitalization – the process by which digital technologies are used to change the way business is conducted – is having a massive impact on economies around the globe, and many governments have already initiated programs to support the digitalization of their industries and government operations. As digitalization is advancing at such an unprecedented pace, it is essential for global and national decision makers to understand what is driving digital development and where trends in digitalization will lead the global economy and society. Insights into the interplay of drivers of digitalization are necessary to inform policymakers and enable them to make evidence based decisions.
New research involving IIASA researchers explains why it is important for consumers, companies, and governments to pay attention to the digitalization of the global economy. Using Finland as a case study, the researchers identified several government actions that can both support national economies and prepare countries for a future shaped by digitalization.

The global economy has benefitted from data driven growth, with industries that produce, process, and sell data based services growing much faster than traditional ones. This means that digital companies that are able to improve traditional processes are an attractive option for investors. In addition, as is clear from recent acquisition activity in the digital market, companies are no longer only investing their higher returns in the development of technologies such as artificial intelligence (AI), but are also buying successful digital start-ups to enhance their portfolios. There is a concern that this could lead to a centralization of capital, which could in turn lead to ultra-capitalism, where fewer and fewer persons own the capital and benefit from increased productivity in the market, thus in effect creating a new kind of monopoly. The polarization of companies in terms of their adherence to digitalization may also lead to a situation where more traditional industries may find it difficult to find investments for further development.
On the other hand, although digitalization could have some negative economic impacts, it is also facilitating the success of smaller companies who are able to open their doors to global markets with relatively low investment required on their part. Peer-to-peer platforms can for example serve consumers around the world with novel business models that do not focus on profits, while global consumer movements can push larger companies and investors towards more ethical ways to run their businesses. Although this will harm some companies, it would also make products and services available to consumers that did not previously have the resources to buy them on more traditional platforms.

In terms of the much-discussed effect that digitalization could have on the labor market, the rise of technology intensive businesses have already led to a boom in the demand for digital professionals across the globe. There are however, concerns that rapid automation could reduce the amount of labor needed, which would mean that middle class professionals currently working in especially the financial, legal, and accounting sectors could end up unemployed.

That said, digitalization might also provide solutions to the perceived problems presented above. One of the greatest benefits created through digitalization is a “borderless world”, where people are empowered through global access to jobs and products. Citizens are, for example, able to use the ‘power of the crowd’ to put pressure on large companies to get them to adhere to higher ethical standards. Funding for new initiatives can be crowdsourced without the involvement of global financial players. Growing a sharing economy (i.e., an economic model incorporating peer-to-peer based activities of providing or sharing access to goods and services facilitated by an online platform) takes products that are not in full usage, to a wider user group, and as a byproduct conserves the planet’s scarce resources. All of these examples are early signs of a new form of democracy, where digitalization is empowering people.

New business models that are applied in e-commerce, peer-to-peer networks, and the transition of consumers from physical products to the consumption of digital services, are reflected as smaller economic activity in a country’s national accounting. The blurring of the boundary between producer and user, and the high growth of assets that prosumers (consumers that produce) generate to platforms like Google or Facebook, are in fact not visible in the gross domestic product (GDP) at all.
In Finland, the Google search engine serves users for free and covers 77% of global searches. In return, Google collects revenue from advertisers that are buying focused advertising space, and users allow Google to use data related to their search behavior to generate additional income. Although it is evident that the consumer will get added value and is generating more value for Google, it is less evident how this part of ‘production’ that is not monetized during the transaction, should be taxed. As a result, the revenue flow of traditional taxation is radically decreasing and governments need concrete measures for adapting to this development. The research indicates that to compensate for national tax revenue flow that is lost, new sources of income should be found, while paying careful attention to not discourage the use of soft innovation resources.

Digitalization also has an impact on the contribution that traditional companies make to the national accounting. According to the research, the prices of information and communication technology (ICT) are fast decreasing as the internet is reducing the need for companies to make large investments in data collection activities, innovation generation, production, and distribution methods. This benefit is transferred to users as, for instance, free products and services. From a consumer perspective the added value they gain is less expensive and the money saved can be spent on other items. This implies that although GDP is decreasing, the value (free services, peer-to-peer shared services and products, and savings in terms of time and other costs) that consumers are gaining is increasing. In cases where this additional money is spent on digital products or services produced outside of the consumer’s country, the domestic consumption could decline even further. This means that GDP and tax revenue will grow only if Finnish companies are agile and generate new business via platforms or cheap AI solutions.

The future is digital

It is clear that digital transformation requires anticipatory and fast adaptation. Adaptation that will enhance the positive impacts of digitalization, however, requires prominent investments and radical changes of structures and procedures. Through an extensive analysis process and four workshops conducted as part of the study in Finland, the researchers produced five alternative adaptation strategies for meeting the challenges described above:

According to the researchers, the future of the Finnish national economy and the success of its welfare society will not be secured by incremental improvements of the current procedures – rather, decisive action in this regard is required sooner rather than later.

Digitalization will transform the global economy