Understand and reduce uncertainties to keep temperature targets on track

Policy Brief #23, June 2019. IIASA research has found explanations for variations in estimates of global greenhouse gas emissions by 2030. According to the researchers, actions set out in countries’ nationally determined contributions are described ambiguously, introducing uncertainty into the stocktaking process. This poses a danger that action plans will not be strengthened sufficiently to avoid dangerous levels of climate change. 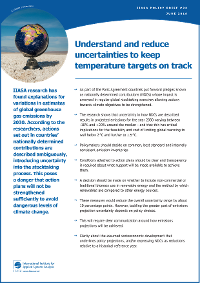 A commitment to climate mitigation

The UN Paris Agreement includes a legally binding mechanism to increase climate mitigation action over time. Countries put forward pledges known as nationally determined contributions (NDCs) whose impact is assessed in regular global stock taking exercises. This allows actions towards climate objectives to be strengthened. However, the actions set out in the NDCs are described ambiguously which introduces uncertainty into the stocktaking process and presents a danger that action plans will not be strengthened sufficiently to avoid dangerous levels of climate change.

The table shows how potential contributors affect uncertainty in projections of global greenhouse gas emissions for the year 2030.

The current ambiguity in NDCs is a critical issue for the global stocktake. Depending on the interpretation of these action plans, the IIASA research shows that emissions could either continue to increase, stabilize, or decrease by 2030. 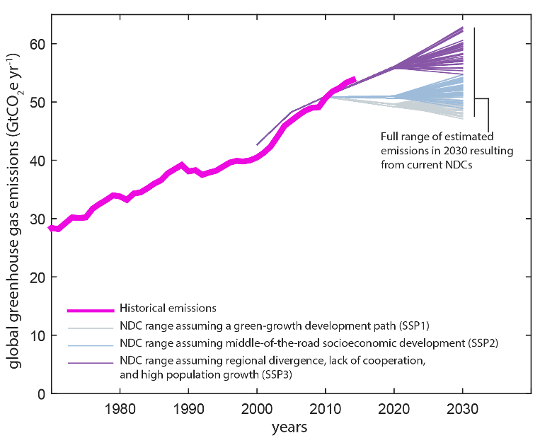 The Paris Agreement however aims for emissions to peak as soon as possible. Even with the great uncertainty about the effect of climate change mitigation plans the world is definitely not on track to limit warming to below 2°C, let alone 1.5°C. Unless policymakers strengthen their nationally defined contributions to reduce uncertainties the choices to be made beyond 2030 become starkly unpalatable. For example, a sudden increase in carbon prices in 2030 (by a factor of about four) is to be anticipated and the window on limiting warming to 1.5°C would close. 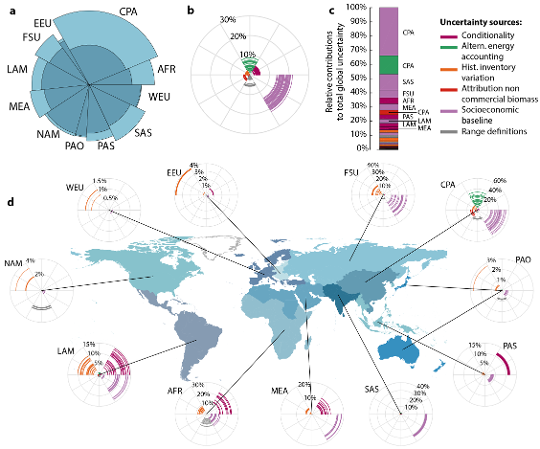 What can be done to reduce uncertainty?

Some variation can easily be removed from emissions targets by technical clarifications but others depend on government policy choices and assumptions for which there is no simple technical fix. IIASA researchers studied the actions pledged by each country to reduce greenhouse gas emissions. From six potential contributors several were identified that contribute significantly to overall uncertainty around reaching the targets of the Paris Agreement.

Understand and reduce uncertainties to keep temperature targets on track