Policy Brief #25, December 2019. There is growing recognition that using the properties of nature can help provide viable and cost-effective solutions to a broad range of societal challenges, including disaster risk reduction. 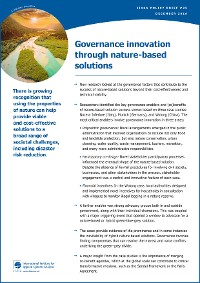 New research looked at the governance factors that contribute to the success of nature-based solutions beyond their cost-effectiveness and technical viability.

A further enabler was strong advocacy groups both in and outside government, along with their individual champions. This was coupled with a major triggering event that opened a window to advocate for a nature-based or hybrid green-blue-grey solution.

The cases provide evidence of the prominence and in some instances the inevitability of hybrid nature-based solutions. Governance involves finding compromises that can resolve the interest and value conflicts underlying the green–grey divide.

A major insight from the case studies is the importance of merging co-benefit agendas, which at the global scale can contribute to critical transformative missions, such as the Sendai Framework or the Paris Agreement.

Looking to nature for solutions

There is growing recognition that using nature’s own attributes can help provide viable and cost-effective solutions to a broad range of societal and environmental challenges. The European Commission defines nature-based solutions as “actions that are inspired by, supported by, or copied from nature”. 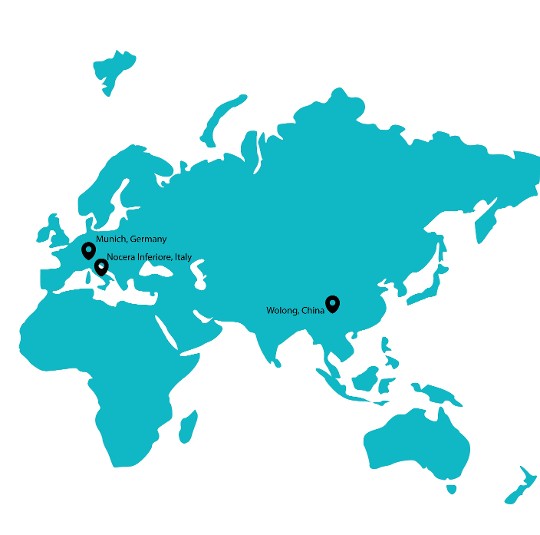 The three selected case studies (Sources: Pin by Yo! Baba from the Noun Project; Illustration 107207656 © Miceking—Dreamstime.com, Design by: Juliette Martin)

Nature-based solutions have emerged as promising strategies for reducing flood, landslide, extreme heat, and other disaster risks. They also aim to provide society with multiple co-benefits, such as ecological resilience, economic growth, and health. Nature-based solutions is an umbrella term that covers a variety of ecosystem-related approaches, such as ecosystem-based adaptation and green infrastructure, to deliver a wide range of ecosystem services. They are increasingly adopted as complements or alternatives to traditional “hard” or “grey” infrastructure solutions that exclusively involve man made structural features.

The PHUSICOS (“According to nature” in Greek) Project, funded by the European Union Horizon 2020 Program, demonstrates how nature-based solutions provide robust, sustainable, and cost-effective measures for reducing the risk of extreme weather events in, or emanating from rural mountain landscapes.

Researchers at IIASA and the University of Geneva described and compared the institutional, legal, social, and economic factors—that is, governance frameworks—for initiating, planning, designing, and implementing nature-based solutions in three successful cases as solutions to climate risks in mountain landscapes: 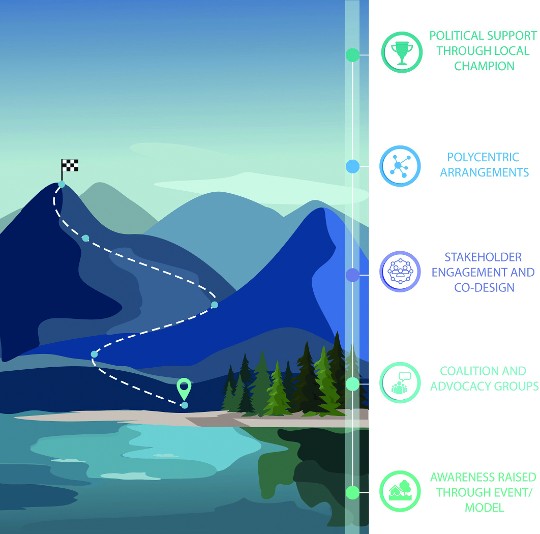 Further enablers for realizing nature-based solutions, as demonstrated in the three cases, include strong pressure (advocacy) groups, both in the administrative bodies (all cases) and outside the government (Germany and Italy), along with their individual champions. In addition, all cases included a major triggering event – a flood/landslide event (China and Italy) or a model that simulated a major event (Germany) – which opened a window for alreadyexisting environmental groups or supportive state authorities to advocate for a nature-based solution.

The cases provide evidence that nature-based solutions are often viable only if they “piggy-back” on grey solutions. For example, in the case of the Isar-Plan, the compromise was a hybrid solution that partially piggybacked the restoration of the river onto concealed grey flood protection measures.

The implemented nature-based solutions were accompanied by co-benefits reaching beyond disaster risk reduction that added significantly to their rationale, appeal, and eventual adoption. A major insight from the case studies is thus the importance of merging ‘co-benefit’ agendas. At the global scale, the co-benefits can contribute to major transformative agendas, including: disaster risk reduction as agreed in the 2015 Sendai Framework; climate adaptation as agreed in the 2016 Paris Agreement; biodiversity as set out in the European Biodiversity Strategy; and sustainable development as agreed in the 2015 UN Sustainable Development Goals. From this global perspective, the transition from grey solutions to nature-based solutions is in many instances not only cost-effective and viable, but also necessary and urgent.

This work formed part of the PHUSICOS Innovation Action project funded by the EU Horizon 2020 research and innovation program (Grant agreement No. 776681). The main objective of PHUSICOS is to demonstrate that nature-inspired or nature-based solutions for reducing the natural hazard risk of extreme weather events in rural mountain landscapes are technically viable, cost-effective, and implementable at regional scale.
This policy brief highlights the results of PHUSICOS Work Package 5, which specifically addresses governance innovation, where governance goes beyond government to involve a network of state and non-state actors (e.g., business, civil society, expert communities) in the process of deciding on and implementing nature-based solutions policy. WP5 partners wish to thank all the colleagues and persons who provided professional advice and collaboration for writing the deliverable - most notably the 47 interviewees in the three case studies. Additionally, this policy brief benefits from the inputs of a World Café discussion held at the PHUSICOS Consortium meeting held in Lucca in October 2019.