Policy Brief #26, April 2020. Collaboration between researchers from IIASA, WU, WIFO, and the IHS provides scenarios of the medium-run economic effects of the lockdown in Austria using the IIASA macroeconomic simulation model. The analysis suggests that the return to the business-as-usual trend may take up to three years after a steep initial economic downturn due to the lockdown, and a gradual recovery thereafter. 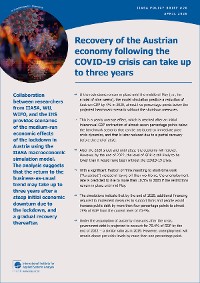 Modeling the economic effects of the COVID-19 crisis

Apart from the direct personal and social costs of the COVID-19 crisis in terms of lives lost, the lockdown of various social and economic activities implemented to combat the pandemic will have drastic economic consequences in Austria. Pausing the activity of several economic sectors in the country for a period of two to three months, however, does not only haveadverse consequences on the sectors that are directly affected. Such a disruption of production affects the entire economy via ripple effects along domestic and international supply chains, as well as by reducing final demand due to reductions in income and higherunemployment rates. Developed small open economies like Austria that have highly sophisticated manufacturing and service sectors with a complex network of international and domestic economic relationships should therefore expect a noticeable multiplier effect of theCOVID-19 pandemic crisis measures.

All major institutions conducting macroeconomic forecasts in Austria have predicted a severe recession of the economy, with predictions of GDP falling between 2% and 3% in 2020. This study contributes to the academic and policy debate about the economic consequences ofthe COVID-19 crisis by employing a simulation model for the Austrian economy. This model provides a flexible and internally consistent quantitative framework to simulate economic policy actions and provide predictions of macroeconomic dynamics in the country.

The level of detail of the model structure allows for the measurement of economic reactions in particular industrial sectors, as well as the propagation of the lockdown measures along the input-output network of the country. The model parameters are calibrated utilizing data fromnational accounts, sector accounts, input-output tables, government statistics and census information, as well as business demography data. The scenario assumptions are calibrated making use of data on the net inflow of unemployed persons by sector collected by the Austrian Public Employment Service for March 2020.

In spite of the uncertainty surrounding the duration of the current lockdown measures and the potential implementation of new ones, this analysis provides relevant insights into the likely developments of the Austrian economy during the coming months and years, as well as a detailed quantitative analysis of the mechanisms through which the measures in place affecteconomic activity.

The projection results show that, if the current lockdown continues until the middle of May (nine weeks shutdown), Austrian GDP would contract by 4% in 2020, almost five percentage points below the projected benchmark scenario without the shutdown measures. The sharp initial contraction will be followed by a gradual recovery. The transition to the previous growth path will take time for at least three reasons. First, the rehiring of employees that were laid off cannot be done on the spot. Second, reigniting investment after the crisis will be limited by the financial conditions of firms. Third, the demand for consumption goods and intermediate goods is likely to remain below trend for some time. 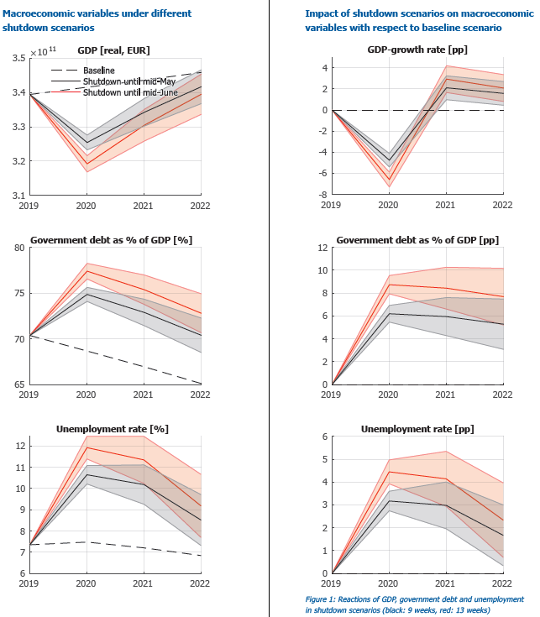 If the lockdown were to continue until the middle of June (13 weeks shutdown), the GDP contraction in Austria would lead to a decrease in GDP of up to 6% in 2020 as a yearly average (almost seven percentage points below the benchmark scenario), but would alsobe followed by a stronger recovery after the output contraction (see Figure 1). The initial interannual economic slump is pronounced in both of these scenarios in the second quarter of 2020, with a seven percentage point decrease of Austrian GDP for a nineweek shutdown, and a contraction of more than ten percentage points in case of a 13-week shutdown below the projected benchmark scenario. The gradual recovery ensuing thereafter depends on the extent of the initial slump, and is thus stronger for the 13-week shutdown scenario. For both scenarios, GDP growth returns to trend after approximately two to three years, but GDPlevels will remain considerably lower than in the baseline scenario until then.

Impact on the labor market and public debt

The effects of the shutdown on labor markets will be dramatic. The assumptions of the projection exercise imply that a significant fraction of firms will resort to government-supported short-time work measures instead of lay-offs, but even in this scenario theunemployment rate is predicted to rise to about 10.5% in 2020 in case of a nine-week shutdown, an increase of three percentage points from the level in 2019. For the scenario where the shutdown lasts until mid-June, unemployment soars to about 12% for 2020 (Figure 1).

The consequences of the COVID-19 crisis will also put a heavy strain on government finances. With the additional government financing needed to alleviate the immediate effects of the economic downturn, the scenarios project public debt over GDP to increase by more than four percentage points to almost 75% of GDP by the end of 2020 (from its current level of 70.4%)under the assumption of a nine-week shutdown.

The longer lasting effects of the crisis will depend on the duration of the shutdown: if the restrictions remain in place until mid-May, government debt will be equivalent to 70.4% of GDP by the end of 2022 — a similar ratio as in 2019. However, unemployment in this scenario will remain above pre-crisis levels by more than one percentage point. If the restrictions continueto be applied until mid-June, both unemployment and government debt would not return to pre-crisis levels before the end of 2022.

Based on our scenario assumptions, highly differentiated output effects are expected for different economic sectors, depending on their relative sensitivity to the lockdown of economic and social activities.

Figure 2 presents the sectoral decomposition of GDP dynamics in this projection and shows that those sectors that offer products of final demand (construction (F), wholesale and retail trade (G), transportation (H), accommodation and food services (I), as well as arts,entertainment, recreation, and other activities (R and S), are most directly affected by the shutdown and experience a steep initial decrease in output of around ten percentage points below the projected benchmark in case of a nine-week shutdown. This can be clearly seen in Figure 2, which presents the contribution of individual sectors to the total changes in GDP due to the COVID-19 crisis (the stacked area under the line diagrams) and relates them to the total shares of these sectors in the economy (the pie diagram in the right lower corner).

Similar decompositions revealing the differential effects in components of GDP can be found in the lower panels in Figure 2. If the shutdown were to be increased to 13 weeks, some sectors would experience output declines by more than 15 percentage points below the benchmark scenario. All industry sectors are affected by the shutdown, with the quantitative effect depending on their position in the supply chain leading up to the sectors that are most directly affected. Once the restrictions are removed, the recovery process will take some time due to a number of adaptation processes required to achieve increases in capacity utilization. The analysis shows that those sectors that are hit the hardest will also experience higher and steeper rates of recovery. In our projections, all sectoral production levels remain below trend up to three years after the COVID-19 crisis.

The scenario analysis carried out using the IIASA simulation model for the Austrian economy concludes that it may take up to three years until the economy recovers from the shock caused by the shutdown measures and returns to the growth path it had prior to the COVID-19 outbreak. For 2020, the model simulations predict a 4% fall in GDP for a shutdown until mid-May, which would be as high as 6% if the shutdown were to last until mid-June. In spite of strong recovery dynamics, with increases in the GDP growth rates around two percentage points above benchmark in the years 2021 and 2022, the GDP levels will remain below the pre-crisis trend within the scenario horizon, indicating lasting effects of the COVID-19 crisis in the medium-term.

The projections suggest that the ongoing COVID-19 crisis will have serious effects on all economic sectors in Austria, calling for government intervention for broad segments of the Austrian economy. Workers in precarious employment positions are dominant in some of the sectors most directly affected by the downturn (e.g., tourism and the food service industry) and are expected to be hit the hardest by the effects of the crisis. To secure the strength and cohesion of Austrian society, also after this crisis, identifying and explicitly targeting interventions to the most strongly affected groups and businesses appears to be a necessary government response to complement the current policy efforts.