Sustainable development pathways to water, food, and energy security in the Zambezi basin

Policy Brief #27, February 2021. The Zambezi basin has enough resources to meet its development targets but doing so sustainably will require making strategic choices that deviate from the prevailing development paradigm and investing in the outstanding natural capital of riparian countries. 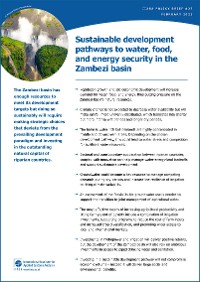 The Zambezi is the fourth largest river basin in Africa and one of the most naturally and culturally diverse regions of the southern part of the continent. The waters from the Zambezi river and its tributaries run through eight countries – Angola, Botswana, Malawi, Mozambique, Namibia, Tanzania, Zambia, and Zimbabwe – and sustain the livelihoods of approximately 40 million people. Characterized by high climate variability, the river and its tributaries are subject to strong seasonal changes with a pronounced cycle of floods and droughts that have significant impacts on the livelihoods and economies of the basin.

Their rich natural endowment does not preclude riparian countries from facing numerous development challenges. While there are many plans to overcome these challenges and pave the road to a sustainable future, most are being conceived in isolation. There is a need, therefore, to assess how these sectoral and country plans will unfold together, anticipate potential trade-offs across sectors and countries, and to plan accordingly. This is particularly important given the uncertainties linked to increasing climate variability and change, and the socioeconomic perspectives that foresee a substantial increase in the demand for natural resources.

Currently, upstream countries want to expand hydropower potential and irrigation development, whereas downstream users fear the implications such policies might have for their own development plans. Stakeholders are increasingly realizing that there is a need to promote greater cooperation across sectors and countries, while also moving away from siloed planning towards the adoption of an integrated approach to policy and planning – the so-called nexus approach. Such an approach could help identify development pathways that recognize the interconnectedness of water, energy, and land resources, thus minimizing negative cross-sectoral impacts and maximizing the reach of limited financial resources.

There are, however, different views among stakeholders on how these integrated and cooperation pathways could materialize. Some believe that development pathways should maximize the use of available natural resources for socioeconomic wellbeing. Conversely, others envision a pathway were cooperation goes hand in hand with strategies seeking to minimize trade-offs across sectors and with the environment to maintain the basin’s natural capital and support green development. The robustness of each of these development pathways needs to be tested in light of climate change and socioeconomic projections.

Assuming that the world manages to stay under a 2°C global warming scenario by 2100, climate projections for the Zambezi do not foresee significant net changes to annual volumes of precipitation across the basin, but it is expected that rains will be more unevenly distributed. The wet season (December to March) is likely to become shorter and wetter, whereas the dry season (April to November) is expected to become longer and drier. These seasonal changes translate into less water being available for economic uses at the end of the dry season.

Water stress in the most populated sub-basins 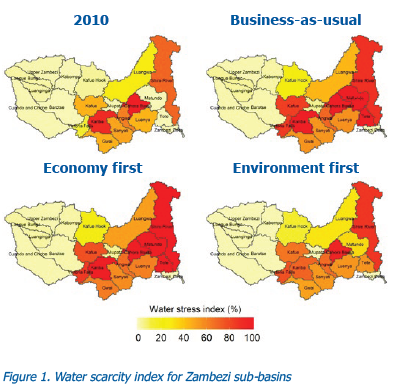 While the region is water abundant, future demand is likely to cause water stress in the middle and lower parts of the Zambezi basin, depending on the chosen development pathway.

By 2050, the gap between water availability and demand under a business-as-usual scenario will become extreme in eight of the most populated sub-basins. The prospect will not improve under a pathway that aims to prioritize the economy and maximize resource use. The main drivers of water stress in these sub-basins under the two scenarios are high water demand for hydropower, and competition between hydropower and irrigation for surface water.

Many trade-offs can be overcome under a scenario that prioritizes the environment and sustainable development, although water stress will remain a challenge in four of the most populated sub-basins.

Currently, groundwater use is limited to drinking water during the dry season. Going forward, this resource is projected to play an important role in supporting the expansion of irrigation and facilitating the reallocation of surface water to hydropower and environmental flows to minimize future trade-offs. 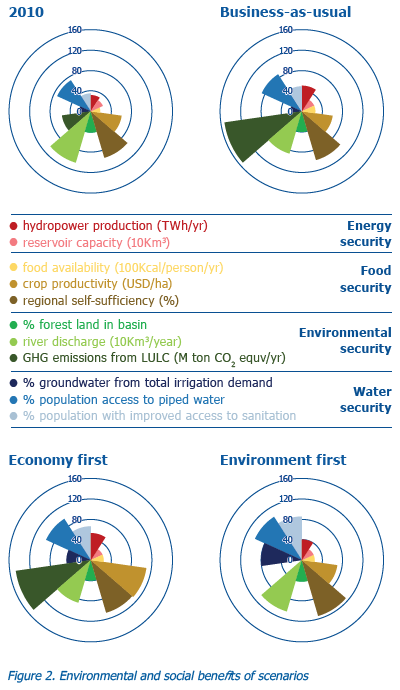 The conjunctive use of surface and groundwater is one management option that can help to alleviate water competition across middle and lower sections, mitigate the expected negative consequences of increasing climate variability on irrigation, and maximize the use of surface water for hydropower while fulfilling environmental flow requirements.

In an environment first scenario, groundwater could cover up to 79% of future irrigation water needs. This is in sharp contrast with the prevailing development approach that foresees surface water covering 97% of future irrigation demands, or the economy first scenario,where at best 49% of irrigation demands will be met by groundwater. Further research is needed to confirm its potential given the lack of feasibility studies.

Without changes to existing agricultural support programs, moderate investments in irrigation and expanded trade policies could support the expansion of 330,000 new hectares for irrigation. Such a strategy, however, does not guarantee a transformation of the agricultural sector. In fact, under a business-as-usual scenario, crop water productivity and the self-sufficiency ratio will remain similar to today, and environmental trade-offs will be large.

Under the economy first scenario, significant investments in irrigation expansion that include increasing irrigation efficiency, expanding multipurpose reservoir capacity, and pumping groundwater for irrigation, combined with farmer support programs aimed at reducing production costs and trade liberalization measures, will increase crop water productivity and the self-sufficiency ratio. However, environmental trade-offs will not diminish.

The benefits for agricultural development and the environment are more balanced in the environment first scenario. The combination of investments for irrigated area expansion and cross-sectoral measures such as improving irrigation efficiency and supporting crop diversification policies for staple crops, result in an increase in both crop water productivity and selfsufficiency, even under strict policies aimed at protecting environmental stream flows and reducing deforestation and associated land use emissions. The combination of efficiency measures and groundwater use also allows securing river discharge at present levels and maintaining environmental flows. 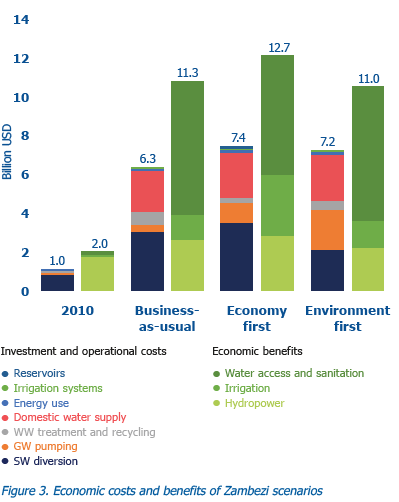 In all scenarios, the economic benefits outweigh the costs. The net benefits in business-as-usual are similar to the returns that will be generated under the environment first scenario. The largest economic returns are nevertheless achieved under the economy first scenario, although this scenario also entails the largest environmental trade-offs. In all three scenarios, returns from investments in access to piped drinking water and sanitation multiply the investment costs by 2.5, highlighting the importance of such investments to support socioeconomic development in addition to many non-monetary benefits such as public health and wellbeing.

IIASA led the Integrated Solutions for Water, Energy, and Land (ISWEL) project in partnership with the Global Environment Facility (GEF) and the United Nations Industrial Development Organization (UNIDO). ISWEL received funding from IIASA and GEF (GEF contract Agreement: 6993). The main goal of the project was to develop tools and capacities to support the integrated management of water, energy, and land at global and regional scales. The Zambezi assessment involved 10 researchers from IIASA across the Energy, Water, and Ecosystem Services and Management programs. The work was led by Amanda Palazzo () and Taher Kahil (). This policy brief was written by Barbara Willaarts with supported contributions from the lead authors, Ting Tang, and Ansa Heyl. Project results can be found here. 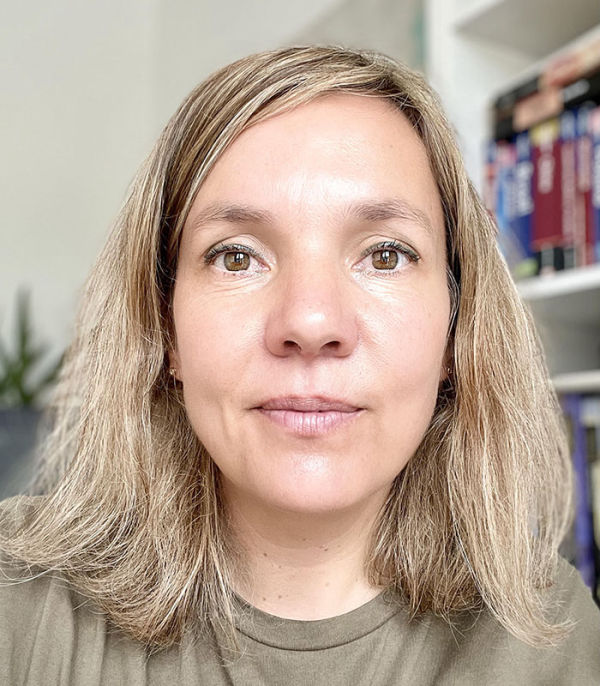 Sustainable development pathways to water, food, and energy security in the Zambezi basin