What if the whole CO2 slate could be wiped clean and substantial amounts of the carbon released into the atmosphere as a result of natural carbon fluxes and the burning of fossil fuels—both historical and current—could be removed from the atmosphere through “negative emissions technology”?

Preliminary data released on 7 October 2010 by the Mauna Loa Observatory in Hawaii shows that the average September 2010 level of atmospheric CO2 was 386.80 parts per million (ppm). Atmospheric CO2 has been accelerating upward from decade to decade. In the past 10 years, the average annual rate of increase was 1.91 ppm.

To stave off runaway climate change, several governments have suggested stabilizing global temperature increase at around 2ºC above pre-industrial levels, which translates into roughly 400–450 ppm of CO2-equivalent, or if possible lower. There has always been a bit of a problem with the notion of stabilizing atmospheric greenhouse gases (GHG) at “a safe level.” It assumes that a safe level of GHGs actually exists and can be sustained, and also that a safe level can be determined in advance—all in an extremely uncertain environment.

One of the most active debates in the scientific community revolves around the tantalizing possibility that using bioenergy in combination with carbon capture and storage (BECCS) could put CO2 emissions into negative territory.

Biomass is a renewable energy created from living or recently living material. Terrestrial plants such as wood, grasses, and crops, are carbon sinks, absorbing carbon from the atmosphere as they grow through photosynthesis. Most of the so-called first-generation biofuel production in Brazil and the USA is ethanol, produced from sugarcane or corn. In Europe biodiesel is produced principally from rapeseed and soybean oils. The second-generation biofuels, including ethanol and methanol, are produced from ligno-cellulosic biomass—the by-products of forest management and waste from agriculture, such as branches, needles, leaves, and other woody tree parts or straw.

BECCS revolves around using biomass to produce bioenergy, then capturing and diverting the CO2 produced during combustion/processing into a long-term geological storage facility. Injection of CO2 in suitable geological reservoirs, which could lead to permanent storage of CO2, is the most mature of the storage methods, with a number of commercial projects already in operation.

A combination of bioenergy technologies together with CCS could decrease costs and increase attainability of low stabilization levels, producing a “negative emissions” situation and thus dealing a “double whammy” to atmospheric CO2 emissions: CO2 fixation by photosynthesis (bioenergy is considered to be carbon-neutral) + capture and storage of CO2 from biomass combustion (negative emissions). To quote the Fourth Assessment Report of the Intergovernmental Panel on Climate Change (IPCC), BECCS is “a potential rapid-response prevention strategy for abrupt climate change.”

Relatively “simple” technology for bioenergy production, such as biomass CHP (Combined Heat and Power Production), using wood chips, pellets, straw bales, or certain specially grown crops, has been in existence at an industrial scale for a long time. CHP plants capture the heat produced during electricity generation and use it for industry supply and local heating of public and private buildings, right through to district heating—common in Scandinavia as well as in Central and Eastern Europe—for whole communities. In conjunction with this, capturing and storing the CO2 emissions of biomass CHP plants has the potential to deliver the highest long-run climate benefits of any energy process: large enough, according to IIASA research, to neutralize even historical fossil fuel emissions, while at the same time satisfying a significant part of global energy and transport fuel demand (i.e., as second-generation biofuel). And the more ambitious the CO2 reduction is, the more advantageous it becomes from the cost viewpoint to include BECCS in the energy technology portfolio. This implies that BECCS can be considered a pivotal technology for attaining low stabilization targets.

Only very few studies have comprehensively assessed the competitive interactions involved in BECCS and an integrated assessment of the environmental impacts is needed when applied at a very large scale. There are critical issues that need to be taken into account. Large areas of land for biomass production would be required if BECCS is to make a significant contribution to the global carbon budget, and policies will need to be implemented to avoid biomass impinging on food security and/or other environmental goals such as biodiversity. However, it is believed that these limitations may be less constraining later on in the century due to technological improvements and higher efficiencies on both sides—(bio)energy and food production. Another critical issue is the potential to store carbon—this applies to emissions from fossil fuels (CCS) as well as from biomass (BECCS). IIASA scenarios for production on the scale needed to be cost-effective show global carbon storage facilities need to be considerably larger than they are considered at present and hence require further investigation regarding geological suitability.

Technologies that can rapidly remove GHGs from the atmosphere are expected to play an important role in reducing the carbon burden, especially if human welfare comes under threat from climate-change related damage such as catastrophic flooding and sea-level rise. It is suggested that climate policy portfolios emphasize abatement of 50–100 percent by 2050, with complete decarbonization of the energy sector in the following decades. These goals are consistent with the most ambitious goals announced by major emitters. A target of at least 25 percent is necessary in the near term by 2030 as a means of keeping future options open.

The IIASA scientists conclude that increasing deployment of sustainable bioenergy with carbon removal and sequestration, together with a structural shift toward low carbon-intensive fuels, would not only be an important component of a risk-limiting regime, but could also offer a number of ancillary benefits for sustainable development. However, BECCS is presently seen as the only available technology for actively removing CO2 from the atmosphere at large scale, which could also put energy production from (forest) biomass in a special situation compared with other renewable energy production options such as wind or photovoltaic.

BECCS, using combined heat and power production (CHP) technology, might contribute substantially to reaching the 20-20-20 targets of the European Union (e.g., generating 20 percent of the total energy demand from renewables and reduce total EU emissions by 20 percent until 2020, calculated from a 1990 baseline):

Using the G4M model for forest biomass assessment and the BEWHERE model for optimized scaling and location of bioenergy plants (both models developed by IIASA’s Forestry Program), IIASA scientists found that bioenergy production (from green field CHP plants) has the technical potential to contribute more than 60 percent toward achieving the goal of 20 percent renewable energy share in the EU by 2020. When assuming direct injection into suitable geological formations for carbon storage at the location of the bioenergy plants (BECCS), about half of the “carbon-neutral emissions” from these bioenergy plants could be captured, stored, and accounted for as negative emissions (see map).

Concluded IIASA scientists: “much more visibility of the BECCS idea as well as targeted research is needed” and “relevant BECCS policies need to be put in place quickly. 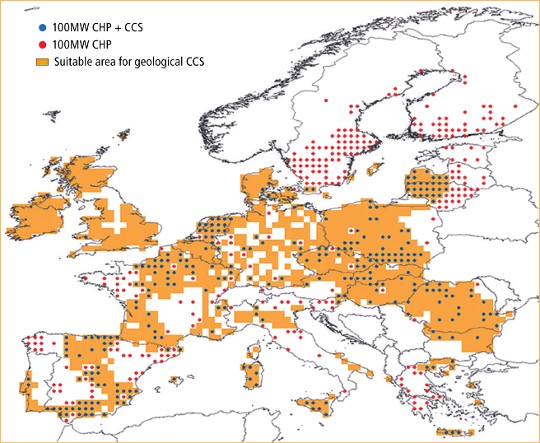 Bioenergy & CCS. The map illustrates the potential bioenergy of CHP (combined heat and power production) plants (100 MW) in EU27 to achieve a 62 percent renewable share of the total energy production in 2020. About half of the plants are placed directly on geological formations suitable for carbon storage. The bioenergy is supplied from European forests under sustainable forest management assumptions and without biomass imports from outside Europe (no competition with any other forest sector industry).