A new cooperative scenarios framework puts climate change into the context of human socioeconomic development, to support the next generation of climate models.

In the wake of the completion of the four Representative Concentration Pathways (RCPs) earlier this year, scientists at IIASA and elsewhere are developing new projections that analyze the interaction between human socioeconomic development and climate change through the use of narrative storytelling.

These new projections, called Shared Socioeconomic Pathways (SSPs), define five possible paths that human societies could follow over the next century. The pathways are part of a new cooperative research framework that is expected to improve interdisciplinary analysis and assessment of climate change, its impacts, and the options societies have for mitigation and adaptation.

The idea for the SSPs came several years ago from the three key groups involved in climate science research—climate modelers (CM), integrated assessment modelers (IAM), and the impacts, adaptation, and vulnerability community (IAV). Although the RCPs provide input that is essential for climate modelers, they need to be complemented by socioeconomic and ecological data that the other research groups currently lack.

The SSPs respond to that limitation by allowing the IAM and IAV groups to study the impact of socioeconomic factors at the radiative forcing levels that define the RCPs. Researchers can use the new scenarios, according to the SSP background document, to project impacts, to explore the extent to which adaptation and mitigation could reduce projected impacts, and to estimate the cost of action and inaction.

“The new process is about developing scenarios in a more timely manner and in a more integrated fashion so the groups in the research community can talk to each other and jointly design scenarios,” says Keywan Riahi, head of IIASA’s Energy Program and a co-chair for the working group developing quantitative IAM scenarios for the SSPs. “The RCPs were developed and passed to the climate community to analyze what physical changes could occur due to climate change. In parallel with that is the socioeconomic dimension which is explored with the SSPs. This is a flexible framework for a better integrated climate science community.”

As with the RCPs, IIASA is hosting the SSP database. The five narratives are:

“The (climate change) community converged on the five archetype SSPs, which describe how the future might unfold in alternative directions,” Riahi said. The IIASA Energy Program, which developed the RCP scenario of relatively high greenhouse gas emissions, is working in collaboration with IIASA’s World Population (POP) and Ecosystems Services Management (ESM) programs to develop data for use in all of the SSPs, as well as a specific focus on the fragmented world of SSP3.

“We’re collaborating with Petr Havlík (an ESM scientist) so that we can have an internally consistent picture of energy and land use changes and analyze the important feedbacks from energy to land, between food, fiber and fuel,” Riahi said. “We’re developing a completely new set of tools to feed into the SSPs, and we want to use that momentum to come up with the next generation of IIASA’s integrated framework. That framework would combine tools with different disciplinary perspectives and operate at different special scales.”

Havlík is translating the SSP narratives with respect to land use into parameters for IIASA’s GLOBIOM model and linking it to the MESSAGE model. “The SSPs are basically input into the models,” Havlík said. “The SSPs create harmonized input that can be used by the models.” Some of the qualitative data he is working with looks at land use over time, including productivity, crop yields, and livestock production and analyzes the environmental impact of agricultural and forestry production, particularly in terms of GHG emissions. “The models will be very sensitive to future land productivity under different [SSP] projections, and will be able to look at low-, middle- and high-income countries and model the impact of low and middle income countries catching up with high income countries productivity on the land use change and biomass supply,” he said.

Wolfgang Lutz, leader of IIASA’s World Population Program, said he became involved in the SSP program in part because past socioeconomic models have typically only used total population size of a country and gross domestic product (GDP) to characterize development.

“The world needs to do better than just total population size and GDP,” he said. “There are many more important dimensions on the human side, and in our recent work we have projected populations by age, sex, and level of educational attainment. If you have it broken down that way, then instead of just one population number, you also cover the gender dimension, differences between age groups, and education as key indicators of empowerment in many respects.

“The important issues that come from knowing the age and education breakdown of a particular population reveal details about such things as future productivity, and how one generation might replace another. Gender is another overriding social concern, Lutz said, and “we for the first time make explicit the gender in socioeconomic modeling. We have education, migration, and death rates, all by age and gender.”

The population data provided by Lutz and colleagues in the population program is being used by all the other teams involved in the SSP project.“ In this human core of the SSPs, IIASA has the monopoly on the data,” Lutz said. “Since we are the only ones doing such projections by education they are also the basis for everyone when it comes to the translation of these alternative trends into economic growth and other variables for the SSPs.”

The researchers are doing a basic, fast-track version of the SSPs in order to have the projections included in the IPCC’s Fifth Assessment Report, due out in 2014. The first round of research results must be submitted for review by January, Riahi said. After that, the scientists will turn to developing more elaborate models that can look at data on a regional and subregional scale.

“Now we want specific characterizations of such things as land use change and the linkage to energy changes,” Riahi said. “In the next phase you may want to go deeper and ask what are the subnational income distributions and how are the poor affected in different countries. That opens up a host of questions about institutional effectiveness and governmental structures.”

A separate benefit of the SSP project is that it has been “a vehicle for more integrated work within IIASA,” Riahi said. “This has been a very fruitful internal collaboration.” 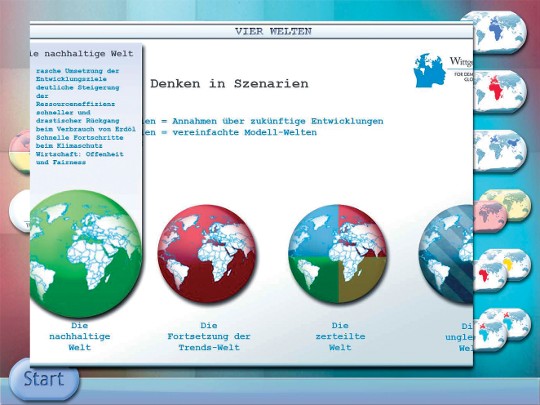 SSPs featured on science boat: Visitors to the MS Wissenschaft are invited to explore four SSP scenarios through an interactive display based on projections from IIASA’s World Population Program. How many people will live on these future Earths? What will be the gender and age of different populations? Is there a relationship between their education level, their health, and their ability to cope with climate change? The display was developed by the Wittgenstein Center in partnership with the Austrian Science Fund (FWF). Further information: www.ms-wissenschaft.at and www.zukunftsprojet-erde.at.