Shaping the future of public transport in Sweden

Options Summer 2018: In 2015, Sweden announced an ambitious aim to become one of the first nations to end its dependence on fossil fuels. Work done by IIASA researchers in collaboration with Swedish partners, is now contributing to discussions to make this goal a reality. 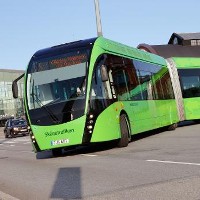 Electric buses could contribute significantly to lowering emissions, less noise from traffic, and a more efficient use of energy in public transport, and several cities in Sweden have already started to introduce them as part of their public transport systems. These buses however, need to recharge to continue operating, which requires a significant investment in infrastructure that can be both expensive and complicated.

The Stockholm city council is currently investigating the possibility of switching to electric bus transport in the city within the next 10 years. An important part of the investigation involves the evaluation of various business models to look at the economics of such an ambitious project and to evaluate possible risks.

As part of a project initiated with 2016 Young Scientists Summer Program participant, Maria Xylia from the KTH Royal Institute of Technology in Sweden, researchers from the IIASA Ecosystems Services and Management Program worked on the development and testing of a model based on the IIASA BeWhere model approach. The aim was to help determine the optimal distribution of charging infrastructure for electric buses in Stockholm. The project concluded in December 2017 and the results were reported to the Swedish Energy Agency who was funding the project.

The city council’s investigation on whether electric buses are the way to go for Stockholm will continue in 2018.

“I have been part of the discussions around the ongoing investigation of the potential for implementing electric busses. The results we produced on the charging time analysis and inner city electrification are of particular interest, and this is what we have mostly contributed to the discussion,” says Xylia, who is also one of the authors of a paper on this work published in the journal Transportation Research Part C: Emerging Technologies.