The impact of drought conditions in the western US 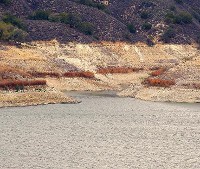 The western US depends heavily on water for hydroelectric generation and the cooling of thermoelectric power plants. During droughts, water resources in the region are scarce, leading to increased emissions. The impact is so severe that droughts in the western part of the country also affect emissions at the national level. Given that power sector CO2 emissions account for roughly one third of all emissions in the US, it is imperative to understand the significance of drought-induced changes in power sector emissions.

Research showed that emissions induced by droughts in California, Idaho, Oregon, and Washington amounted to 7–12% of total CO2 emissions from their respective power sectors. The yearly rates were 8–15% of their respective 2030 annual targets outlined in the Clean Power Plan. Researchers hope the results can be used to influence mitigation targets for pollutant emissions, not just in the US, but worldwide.

“We have illustrated yet another interaction between climate change, air pollution, and water,” explains Fabian Wagner, a IIASA researcher and an author of the study. “Some of these nexus relations are subtle, and it was important to use systems analysis to reveal some of the hidden consequences that are likely to play a role in the future.”

IIASA Activities with US