Defense of the natural realm

Options Magazine, Summer 2021: At a crucial moment for beleaguered nature, IIASA research is showing that we can reverse biodiversity loss. It will need an eﬀort that is grand in scale and focused where rewards are greatest. 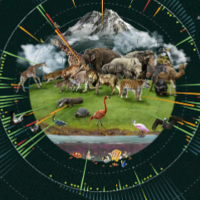 Humanity’s advance has meant retreat for millions of other species. Habitats are ploughed and paved; pollution chokes ecosystems; overfishing scours the seas; climate change brings drought and scrambled seasons. Even from a cynical, human-centric point of view, this is a looming disaster. Plants and animals feed us, stabilize the climate, filter air and water, and give us fuel and medicines.

Decades of conservation efforts have had limited success. Almost every country is signed up to the Convention on Biological Diversity (CBD), a treaty that set out 20 biodiversity targets in 2010. By the 2020 deadline, however, only six of these targets had been partially achieved. According to the 2019 IPBES Global Assessment Report on Biodiversity and Ecosystem Services: “Biodiversity... is declining faster than at any time in human history.”

IIASA research holds out hope that we can turn things around – but it won’t be easy. An influential study led by IIASA researcher David Leclère modeled how different policies could change land use, and how that would affect various aspects of biodiversity such as species extinctions. In one scenario protected areas stretch to 40% of the planets’ land (from 15% today), and 5 million km2 of degraded land is restored. The study projects that biodiversity trends should start to improve around the middle of the century – but many regions still see heavy losses, and food prices rise, undermining the UN’s goal to end hunger. 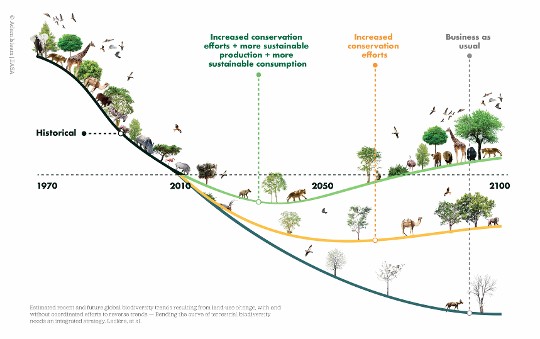 A happier picture emerges if we also tackle food supply and demand: adding sustainable increases to crop yields and agricultural trade, plus a more plant-based diet and less food waste. The study projects that this should turn biodiversity trends positive before 2050, allow more land to be restored, prevent food prices from rising, provide powerful benefits for climate, and cut the use of water and fertilizers.

These messages are amplified in a 2020 article led by Sandra Diaz at the University of Cordoba in Argentina, authored by dozens of leading researchers including Piero Visconti, who leads the IIASA Biodiversity, Ecology, and Conservation research group. Among other things, the authors propose outcome-based goals for species and genetic diversity, along with goals to halt the net loss of natural ecosystem areas and integrity, and ensure that loss of a rare ecosystem cannot be offset by an increase in another ecosystem.

The CBD is now devising a strategy for the coming decade. Its draft Global Biodiversity Framework (GBF) embraces some of these ideas, including goals based on biodiversity outcomes, such as reducing the number of threatened species by a certain percentage, and maintaining genetic diversity. Five GBF action targets for 2030 are broadly consistent with the intervention in Leclère’s integrated scenario. The draft GBF also cites Diaz et al. frequently – although its goal statements have not yet changed in accordance with that paper’s suggestions, says Visconti. According to Leclère, the final framework, which is due to be ratified in October 2021, needs to ensure that national plans align with the desired global goals and that efforts and benefits are equitably distributed. 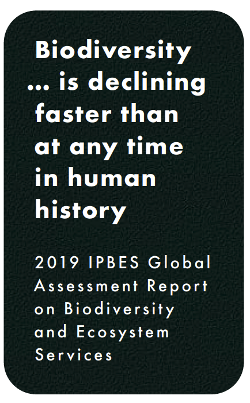 The draft may also rely too much on area-based targets, such as expanding protected areas to cover 30% of land and sea. Protected areas are often put where they are  least inconvenient, instead  of most effective.

“Look at the average elevation and remoteness of National Parks. They tend to be high and far; rock and ice,” notes Visconti, adding that for biodiversity impact, quality is more important than quantity.

These sentiments are confirmed by two recent studies involving IIASA researchers. One looked at restoring cropland and pastureland back into natural habitat. The authors mapped converted land, calculating the local impact of restoration on carbon and species extinction risk based on field data from similar sites. They then modeled global outcomes from restoring 15% of all converted land, amounting to 4.3 million km2. A linear programming algorithm found the optimum choice of conversion sites, for various weights given to extinction risk, carbon, and cost. One restoration scenario, designed to optimize carbon and biodiversity, prevents 60% of extinctions that would otherwise be expected, and locks up almost 300 gigatons of CO2 – about seven years of global emissions at today’s rate.

The second study, led by IIASA researcher Martin Jung, looked at conservation, calculating its effect on biodiversity, carbon, and clean water provision. Unlike earlier studies, this included not only animals, but also plants. It concludes that managing just 10% of global land area can improve the conservation status of 46% of species, and conserve 27% of stored carbon and 24% of clean water. A detailed map of local benefits shows where people can get the greatest value for their conservation effort.

Data on biodiversity is essential to guide the campaign, but that is often scarce.

The group is aiming to improve this situation, partly through novel data sources such as citizen science, imaging with drones, and lidar from satellites and aircraft.

“We use statistical techniques to harmonize data, in order to put it all together,” says McCallum.

McCallum also leads the stakeholder engagement effort of EuropaBON, the EU’s biodiversity observation network project, aiming to identify critical gaps in data. Even though Europe is better covered than much of the world, there are still plenty of weak areas – particularly in aquatic habitats and this project will help to drive data integration methods.

“In data-rich areas you can develop techniques to then scale up and use globally,” he notes.

A solid theoretical understanding could fill data gaps, and make policy-facing models more realistic. One aim is to understand why some ecosystems are so rich in species.

“All ‘why’ questions in biology have an evolutionary answer,” explains Ulf Dieckmann, a senior researcher  in the IIASA Advancing Systems Analysis Program, who has spent 25 years at IIASA developing adaptive dynamic theory, a form of systems analysis that links ecology and evolution.

A striking success of this approach has been to show how rainforest plants can be so diverse. According to niche theory, each species adapts to fit a unique position in an ecosystem. Animals compete for different foods, which creates many niches; but all plants eat sunlight. Because of this, niche models had predicted that rainforests should have few types of trees, and only one shade-tolerant species. Real forests however have many shade-dwellers, which cast niche theory into doubt.

Dieckmann collaborated on a more realistic model, combining plant physiology, ecology, and evolution. It allows species to have two variable traits (height at maturity and leaf thickness). When tree-fall or fire opens up a new patch of forest, fast-growing colonizers move in, followed by slow-growers. In the model, evolution leads to a large number of shade-tolerant tree species with slightly different traits. It also shows realistic plant diversity in temperate forest, shrubland, and wooded riverbank. This kind of insight could inform conservation work. 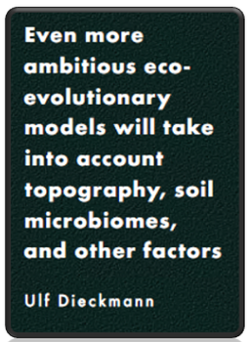 “One could ask what ecological processes must be kept intact to preserve biodiversity?” says Dieckmann.

As well as being a desirable outcome in itself, biodiversity affects other systems: for example, maintaining forest resilience and so keeping carbon locked up. IIASA is building a new integrated biosphere model, iBIOM, which could capture some of these effects, such as the role of insect pollination on crop yields.

As part of an overall integrated modeling framework now being developed at IIASA, iBIOM will help to explore the complex interplay between climate and biodiversity.

“This is a huge challenge,” says Leclère.

For one thing, models will have to capture land use in great detail, for example the effect of planting different plant species to sequester carbon. But the reward could also be huge, revealing which climate mitigation options are best for biodiversity – helping us fulfil the CBD’s 2050 vision to live in harmony with nature.