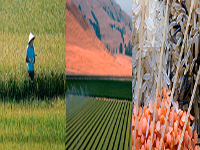 The Global Agro-ecological Zones (GAEZ) system is based on an inventory of land resources and helps evaluate the biophysical limitations and production potentials of land with the aim of rational land use planning.

GAEZ v4.0 was released in 2014, following the introduction of the new climate model projections, the Representative Concentration Pathways (RCPs), developed for the IPCC Fifth Assessment Report and beyond. The new RCPs replace and complement the scenarios from the Special Report on Emission Scenarios (SRES), published in 2000.

AEZ methodology has been developed and refined over more than 30 years by IIASA and the Food and Agriculture Organization (FAO) of the UN. The AEZ approach became global in 2000 with the availability of digital global databases of climatic parameters, topography, soil and terrain, land cover, and population distribution. These data sets have not only enabled revision and improvements to AEZ calculation procedures, but have also allowed crop suitability and land productivity assessments to be extended to temperate and boreal environments.

GAEZ 3.0 itself was a major update of data and extension of the methodology used in the 2000 and 2002 GAEZ releases. It incorporated two important new global data sets on actual yield, on the one hand, and production and gaps between actual and potential yield and production, on the other.

The GAEZ methodology follows an environmental approach. It provides a standardized framework for the characterization of climate, soil, and terrain conditions for analyzing synergies and trade-offs of alternative uses of agro-resources (land, water, technology) for food and energy production, while preserving environmental quality. Examples of GAEZ applications are:

Land is an indispensable resource for the most essential human activities: it provides the basis for agriculture and food production, for forest production, water catchment, recreation, and settlement. The range of specific uses that can be made of land for human needs is limited by environmental factors including climate, topography and soil characteristics. It is also significantly determined by demographic, socioeconomic, cultural, and political factors.

The ability to assess Earth's available resources in great detail using GAEZ v4.0 is already supporting policymakers in developing national, regional, and global strategies for the production of food in a way that ensures long-term sustainability of land and water resources. 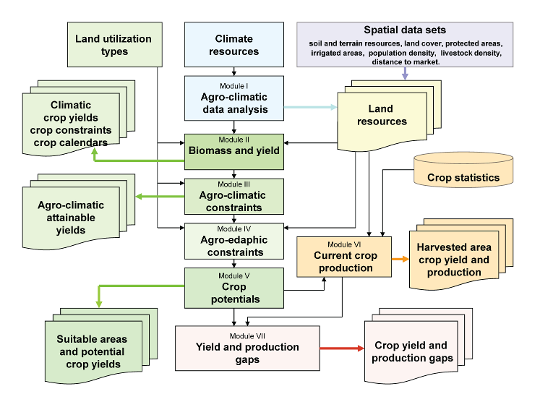 Overall GAEZ model structure and data integration. There are five main steps involved in calculation procedures for establishing crop suitability estimates: 1) climate data analysis and compilation of general agro-climatic indicators; 2) crop-specific agro-climatic assessment and water-limited biomass/yield calculation; 3) assessments of yield reduction due to agro-climatic constraints; 4) implementation of edaphic assessments to calculate yield reduction due to soil and terrain limitations; and 5) integration of results into crop-specific grid-cell databases. Two main activities are involved in obtaining the grid-cell level area, yield, and production of the main crops: Estimation of shares of rain-fed or irrigated cultivated land by grid cell; and estimation of the area, yield, and production of the main crops in rain-fed and irrigated cultivated land. Global inventories of yield gaps were created by comparing potential rain-fed yields with yields of downscaled statistical production.

To feed an estimated world population of 9 billion in 2050, agricultural production will need to rise by almost 1.4% per year from the year 2000 baseline. This will require an enormous effort on the part of farmers, researchers, and agricultural extension workers. Given all the pressures involved in some regions in making the swift improvements needed in, for example, irrigation, transport infrastructure, and fertilizers, it is uncertain whether such output growth per unit of land can be achieved and sustained to 2050.

Much of the land most suitable for food and feed crops is already in use or is not available because it is under legal protection, has carbon and biodiversity value (i.e., forests), or feeds most of the world’s 3.5 billion ruminant livestock. On a per capita basis, "prime" and "good" resources for agriculture are plentiful in only a few regions, mainly Australia, South America, North America, Eastern Europe, and Russia. There is little availability in northern Africa and Asia, where technological improvements, efficiency gains, and yield gap reductions will be needed to overcome resource scarcities.

Land and water use for food production will increasingly have to compete with other uses and ecosystem services. Coping with these competing demands requires better understanding and management of land, water, and ecosystem services.
Decision makers at national and regional level require essential information on how to carry out robust expansion of food and bio-energy production, while sustaining ecosystem functions, preserving global gene pools, and enhancing terrestrial carbon pools.

Global Agro-ecological Assessment for Agriculture in the 21st Century: Methodology and Results