IIASA population researchers are presenting new findings at the Asian Population Association Conference, which runs from 26 to 29 August in Bangkok, Thailand. 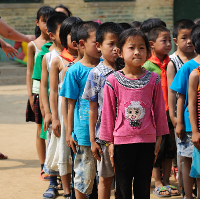 Population changes - whether from migration, fertility, or mortality - affect people’s lives, education, and livelihoods. New research from IIASA scientists shows that education levels strongly influence how well populations can adapt to climate change. The researchers will present these findings, among others, at the Asian Population Association Conference, which runs from 26 to 29 August in Bangkok, Thailand.

IIASA population researchers use systems analysis methods and demographic tools to answer questions about human capital—investments in human beings such as healthcare, education, and job training that benefit people in multiple ways. At the conference, IIASA researchers will present a wide variety of findings related to population changes and their effects, particularly in Asia.

Population growth in AsiaRegina Fuchs will discuss new results from a global survey of experts, which provide the bases for projections of future populations in Asia. The projections demonstrate some of the key issues and forces that affect fertility. Anne Goujon will present the progress achieved in terms of human capital, with a focus on educational growth and fertility, from 1970 to 2010 in all Pacific Rim countries.

Aging populations in Asia
Daniela Weber and Sergei Scherbov will provide new findings on aging in Asia. In Europe and North America, people are living longer and birth rates are declining, meaning that a greater portion of the population is elderly. The situation in Asia is more varied, with some countries having among the world’s lowest fertility and facing rapid aging, while others are aging less rapidly due to higher fertility.

Climate risks and education
Erich Striessnig and Raya Muttarak will present new research related to population, education, and adaptation to climate change. Striessig will also present new finding on the link between air pollution and health, using India as a case study.

Education and vulnerability
Alessandra Garbero will present a vulnerability profile on the village-level from a multi-dimensional perspective and offer policy interventions that are tailored to meet poverty and other demographic and environmental stressors.

Cognitive skills
Marcin Stonawski and Vegard Skirbekk will discuss their study on the formation of human capital in India and China, incorporating measures of comparable cognitive abilities such as formal education, work-experience, health and human capital depreciation following technological progress.

Population projections
Samir KC will provide an overview of IIASA’s World Population Program current work on a set of assumptions about the future of fertility, mortality, migration, and (in addition) education in all countries of the world. The results yield a different picture of the future evolution of the Asian population (including India and China) as well as that of the World than forecast by the United Nations.

For an full overview of the contribution of POP at the APA conference click here.