Social exclusion as a punishment strategy helps explain the evolution of cooperation, according to new IIASA research. 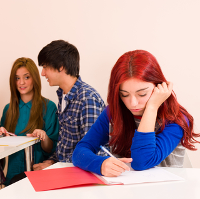 The new study, by IIASA Evolution and Ecology Program postdoctoral fellow Tatsuya Sasaki, provides a simple new model that ties punishment by social exclusion to the benefits for the punisher. It may help explain how social exclusion arose in evolution, and how it promotes cooperation among groups. The study was published today in the journal Proceedings of the Royal Society – Biology.

“Punishment is a common tool to promote cooperation in the real world,” says Sasaki. “And social exclusion is a common way to do it.” From reef fish to chimpanzees, there are many examples of animals that promote cooperation by excluding free riders.  Humans, too, use social exclusion as a way to keep people following societal rules. For example, says Sasaki, traffic violators or drunk drivers may be punished by losing their drivers licenses, essentially excluding them from the driving community.

But how did such punishment evolve? The new research, which uses evolutionary game theory, shows that excluding people from a group indirectly provides rewards for the punisher, thus encouraging them to exclude those they have reason to punish.

“Imagine a pie,” says Sasaki. The fewer people sharing that pie, the more pie everyone gets. But you can’t deny people pie for no reason. There needs to be a justification, for example, that someone did not contribute to baking the pie—a free rider, in game theory parlance. Sasaki says, “If you punish free riders with social exclusion, it increases the payoff for the punishers.”

Social exclusion also promotes cooperation, the study shows. If free riders are denied a piece of the pie, people will be more likely to cooperate and ensure they get to share in the reward.

Previous studies in evolution and game theory have mostly focused on other punishments that are more costly for the punisher. While a few studies have included social exclusion as one possible punishment, Sasaki’s work is the first to connect exclusion to the benefits for the punishers.

The work has potential applications beyond biology, for example in understanding international cooperation. “It is important to understand how we have achieved some degree of cooperation across all kinds of collective enterprises that are important to local groups or to humankind at large,” says Sasaki, “In all such cases, our analysis could help design intervention strategies that enable future increases in cooperation.”

Tatsuya Sasaki has just accepted a second appointment as a project postdoctoral fellow at the University of Vienna.