Climate change impacts on rivers and streams may substantially reduce electricity production capacity around the world. A new study calls for a greater focus on adaptation efforts in order to maintain future energy security. 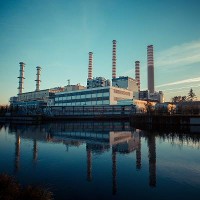 Climate change impacts and associated changes in water resources could lead to reductions  in electricity production capacity for more than 60% of the power plants worldwide from 2040-2069, according to a new study published today in the journal Nature Climate Change. Yet adaptation measures focused on making power plants more efficient and flexible could mitigate much of the decline.

“Hydropower plants and thermoelectric power plants—which are nuclear, fossil-, and biomass-fueled plants converting heat to electricity—both rely on freshwater from rivers and streams,” explains Michelle Van Vliet, a researcher at the International Institute for Applied Systems Analysis (IIASA) in Austria and Wageningen University in the Netherlands, who led the study. “These power-generating technologies strongly depend on water availability, and water temperature for cooling plays in addition a critical role for thermoelectric power generation.”

Together, hydropower and thermoelectric power currently contribute to 98% of electricity production worldwide.

Model projections show that climate change will impact water resources availability and will increase water temperatures in many regions of the world. A previous study by the researchers showed that reduced summer water availability and higher water temperatures associated with climate change could result in significant reductions in thermoelectric power supply in Europe and the United States.

This new study expands the research to a global level, using data from 24,515 hydropower and 1,427 thermoelectric power plants worldwide.

“This is the first study of its kind to examine the linkages between climate change, water resources, and electricity production on a global scale. We clearly show that power plants are not only causing climate change, but they might also be affected in major ways by climate,” says IIASA Energy Program Director Keywan Riahi, a study co-author.

“In particular the United States, southern South America, southern Africa, central and southern Europe, Southeast Asia and southern Australia are vulnerable regions, because declines in mean annual streamflow are projected combined with strong increases in water temperature under changing climate. This reduces the potential for both hydropower and thermoelectric power generation in these regions,” says Van Vliet.

“We show that technological developments with increases in power plant efficiencies and changes in cooling system types would reduce the vulnerability to water constraints in most regions. Improved cross-sectoral water management during drought periods is of course also important,” says Van Vliet. “In order to sustain water and energy security in the next decades, the electricity focus will need to increase their focus on climate change adaptation in addition to mitigation.”