IIASA alumna Jeannette Aspden passed away peacefully from cancer on 30 September 2018 in Washington DC at the age of 72. Below alumni pay tribute to Jeannette's memory with personal reflections. 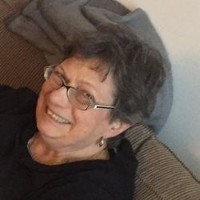 Remembrance of Jeannette Lindsay Aspden
by Jesse H. Ausubel with thanks to Sabra Bissette Ledent

Former IIASA Editor Jeannette Aspden passed away peacefully from cancer on 30 September 2018 in Washington DC at the age of 72.

I met Jeannette, then surnamed Lindsay, during the summer of 1979 at IIASA where I was a member of the Young Scientists Summer Program. I do not recall exactly how or when we met, through professional cooperation on a scientific publication, socializing over spritzers at the Stueberl on the Schlossplatz, playing softball, or just because we were both Americans, who made up about one-fifth of the 200 or so people who then worked at IIASA.

We quickly became friends. One bond was that we had both worked for the US National Academy of Sciences in Washington DC. Another was baseball fandom and participation in the Friday afternoon softball games played creatively by the Institute’s staff members, many of whom did not know the rules. A third was that we appreciated the unusually murky, romantic, and often comic life of the Institute, in Schloss Laxenburg, then still under renovation, and becoming grander every few months as additional wings opened and opulently restored rooms hosted discussions that could swing abruptly from weird English to gibberish to profundity.

We remained friends right up to the present, through Jeanette’s moves to London (more precisely, East Dulwich), Pennington (New Jersey, USA), and Washington DC. We enjoyed a Washington Nationals baseball game in June in the great seats that came with her season “Abonnement” whose cost exceeded parterre at the Staatsoper.

I should mention that I was friendly separately with Jeannette’s late husband, Philip Aspden, before Philip and Jeannette became one. Philip, who died suddenly at age 68 in December 2013, had come from the Operational Research Services of the Department of Health and Social Security in London and worked at IIASA with experts from the Institute of Control Sciences of the Soviet Academy in Moscow making dynamic, hierarchical mathematical models of national health care systems. Philip would later co-author pioneering research reports on friendship formation in cyberspace and barriers to internet usage (1997) and on patient safety and prevention of medical errors (2003, 2007). Philip was a terrific person, warm, smart, and funny, and it was wonderful when Jeannette and Philip united, and now we miss them both.

Jeannette arrived in Laxenburg in 1977 with the challenging job of creating an attractive, best-selling line of scholarly publications with names like “The Bratsk-Ilimsk Territorial Production Complex” or my articles about the then-ridiculous idea of global warming. In fact, she succeeded amazingly well, and IIASA’s publications earned recognition for excellent editing. Numerous colleagues who could not write well in English (or maybe could just not think straight) found themselves authors of well-reasoned papers impeccable according to the Chicago Manual of Style. Jeannette built a first-rate editorial team including Robert Lande and Hope Cohen. Jeannette partnered closely with Sabra Bissette Ledent, who artfully produced the publications in a department watched over by the smoky Robert Duis. All worked in the GP Building.

The basic phrase I identify with Jeannette is high standards. Jeannette was not a perfectionist. She understood that errors happen, in publishing and baseball, but she worked tirelessly to lift norms and adhere to high ones. She worried that every entity from a local café to world science was “going to hell in a hand-basket,” and she would combat the demons and sloth that made it happen.

This determination for excellence led Jeannette to institutions such as Bryn Mawr College, the NAS, and later Carnegie Corporation of New York, where she felt at home and could relax at least a little. IIASA gave Jeannette perhaps her greatest challenge, and perhaps her greatest professional accomplishment: to set high standards for a young institution with bright but often slovenly researchers from Bulgaria to Budapest to British Columbia. Jeannette would have been quite at home in Switzerland or Japan, which highly esteem quality control, but she was needed more in Austria, England, and America.

England always vexed her with its veneers of excellence but lack of commitment to solving problems. American vexed her with the scale of its needs. But Jeannette made islands of order where she could.

I recruited her in 1990 to manage all the publications of the Carnegie Commission on Science, Technology, and Government. This elite of America’s elite (President Jimmy Carter, Supreme Court justice Stephen Breyer, former Secretaries of Defense William Perry and Ashton Carter, etc.) was producing ugly, barely grammatical broadsides. Jeannette cleaned up the act.

Baseball was a love and a metaphor for Jeannette, who kept a scorecard for every game traditionally by hand. We met during the apotheosis of the team of her youth, the Philadelphia Phillies. After 30 years of misspellings, dangling participles, and missing conclusions, in 1980 the Phillies won the championship. Run the presses! Celebrations of Philadelphia in Wien!

Team play matters, and in this recollection I surely represent not only the boisterous members of the IIASA softball league but all those who benefited from Jeannette’s superb editing and high standards. Jeannette’s life in truth reminds us that none of us is entitled to effective, polished, correct communication. It emerges from disciplined, careful, informed work.

Roger Levien, IIASA Director during Jeannette’s service, writes “Jeannette was one of the pillars of early IIASA, shoring up its communications so the world would take notice, and brightening the Schloss with her open and helpful presence.”