During the recent AAAS Conference, IIASA hosted a symposium and reception, a conference session, and three 2015 YSSPers presented posters. The video from the symposium is now available, and YSSPer Franziska Gaupp tells us about the experience. 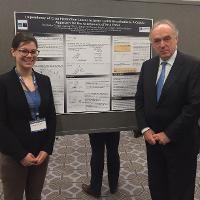 It was great seeing so many familiar faces in Washington, DC this February.  For those alumni that were not able to join the symposium, check out the video below.

Franziska Gaupp, a 2015 YSSPer in the IIASA Risk, Policy and Vulnerability (RPV) Program, also shares her experience during the AAAS Conference in Washington, DC.  She presented a poster along with fellow 2015 YSSPers Zhimin Mao (who received the Roger Levien Fellowship) and  Sennai Mesfun.

"When our YSSP summer in Austria was nearly over and our results came together in our final report, we were invited by IIASA to join their team at the AAAS Annual Meeting in February 2016 in Washington DC to present our work as part of a student poster session.

In the end, three of us submitted an abstract and met in a cold and sunny DC. Before the AAAS meeting officially started we were invited to join a meeting with the IIASA US Nation Member Organization (NMO) in which recent developments at IIASA and plans for the future were discussed, as well as how the US NMO could support these. This was a great opportunity to look 'behind the curtain' of IIASA and to get an insight into how research and cooperation strategies are developed.

The US NMO was specifically interested in YSSP and we discussed how YSSP alumni could better stay in contact and benefit from the large network across different countries and institutions. In the afternoon, the symposium “International Scientific Cooperation for Global Sustainability”, organized by IIASA, took place with talks and panel discussions about the sustainable development goals, the future of the Arctic, ecosystem services, and biological sequestration.

The AAAS Annual Meeting itself was different from other conferences in the sense that it was not only about science but also about how to communicate science to industry and policymakers. In contrast to the more general topics of the main sessions, the poster presentations gave us a great opportunity to learn about other students’ and researchers' work within our field and to present the results from our summer projects at IIASA to others.

People were extremely interested in YSSP and asked us about it, not only during the poster session but also when we were assisting at the IIASA booth in the exhibit hall. We told people about working in a castle, having potluck style dinners in a student house kitchen with new friends, and about the experience of walking in a beautiful park when a break from work is needed. So, if there’s a sudden increase of YSSP applications from the US next year- you know who to blame (the over 20 types of ice-cream in Laxenburg we were telling people about)!"
Franziska Gaupp 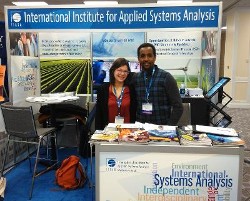 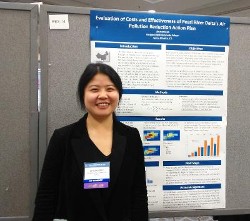 Zhimin Mao during the Poster Session

Franziska Gaupp was a 2015 YSSP student in the Risk and Vulnerability Program under the supervision of Georg Pflug.  Her YSSP research project was "risks of correlated droughts to food supply in the world’s breadbaskets".

Franziska is a doctoral student in the Environmental Change Institute investigating spatio-temporal correlation of droughts and their influence on agricultural production in the major global crop production areas. She also participates in the Global Water Partnership (GWP)/OECD “Global Dialogue on Water Security and Sustainable Growth.” She holds a BSc in Economics from the Free University Berlin where she also worked as a teaching assistant for the modules “Macroeconomics” and “State and Allocation.” She holds an MSc in Ecological Economics from the University of Edinburgh. Prior to joining the University of Oxford, she spent time at the Potsdam Institute for Climate Impact Research (PIK) where she investigated cereal price changes caused by supply shocks from a global perspective.