The Signing of IIASA's Charter

In celebration of IIASA's 40th Anniversary, Prof. Vasko recalls when IIASA's Charter was signed on 4 October 1972 at the Royal Society in London.

"It was a great honor to be there," says Dr. Tibor Vasko, the signatory for former Czechoslovakia, "after so many years of preparation." 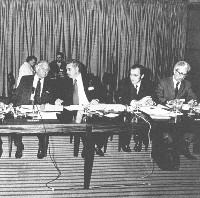 If you look at the signatories to the IIASA Charter that established the Institute on 4 October 1972, you'll find among them a Czechoslovakian scientist and diplomat called Tibor Vasko.

"I signed the Charter in a hurry in the corridor," he says. "The  signing was symbolic because an Annex had to be added regarding payments in local currencies, and this changed the original wording. However, it was a great honor to be there after so many years of preparation."

Prof. Vasko adds. "I represented the Czechoslovak Socialist Republic. Now there is no Czechoslovakia and not so many Socialists, but there is still IIASA, which proves how robust and resilient the founding fathers' ideas of cooperation and mutual benefit were."

Prof. Vasko was to have an active career at IIASA, ultimately as an honorary scholar working on a long-lived project supporting the transition of the economies of former eastern bloc to the market system. Notably, he was also Dean and Scientific Coordinator of IIASA's Young Scientists Summer Program (YSSP) in its most formative years.

His keen eye for IIASA history and its quirkier side provides interesting insights into some serious occasions. It is from him that we have the details of how Russian Premier Alexei Kosygin and US President Lyndon B. Johnson met in 1967 to cement the deal to create the Cold War scientific institute that would become IIASA. 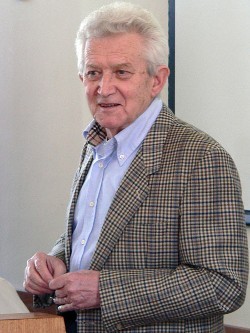 Tibor Vasko speaks to YSSP students at IIASA in 2009.

With the Six-Day War between Israel and the Arab States breaking out on 6 June 1967, both leaders had an interest in meeting to try to improve international relations. Kosygin had traveled to New York as a guest of the UN to discuss the War. He and Johnson wanted to meet but, for reasons of protocol, the White House in Washington DC and UN headquarters in New York were out of bounds. As Dr Vasko puts it: "The diplomats became very inventive. They proposed a meeting halfway between New York and Washington so that both gentlemen sacrificed the same amount of posture in approaching the other side." This mid-point happened to be the hitherto unremarkable town of Glassboro, New Jersey.

In 1995 Prof. Vasko visited Glassboro to look at the Dean's house, Hollybush Mansion at Glassboro State College—now Rowan University—where the Summit took place at just 16 hours' notice from 23 to 25 June 1967. Wondering if the locals even remembered the Conference, Dr. Vasko popped into a local McDonald's restaurant to canvass diners' opinions. He recalls: "To my surprise they knew about it and with very visible pride they told us about it—28 years after the event!"

It took five years of "a lot of discussion and compromise" before a location, name, modus operandi, and scientific approach were agreed for IIASA. The negotiations were under the leadership of Sir Solly Zuckerman, the British government's chief scientific adviser from 1964 to 1971, one of whose major achievements was to become a pioneer in the study of primate behavior.

"Once the ink on the Charter dried," Tibor Vasko says, "the Royal Society, the British party to the negotiations, gave us a dinner. Because the Royal Society is a sponsor of the London Zoo, and because of Sir Solly's research focus, the dinner was in the Zoo, in pleasant premises next to the orangutan cage.

"We were served cocktails outside since it was a warm evening in spite of the October date.  A giant orangutan male was watching us and looking at me through the wire fence with interest. I speculated—is this a message Providence is sending to me through this animal that we did the right thing, or is the animal is just thirsty? I will never know."

But Prof. Vasko did come to see that the right thing had been done. "IIASA managed to 'tunnel' new useful ideas through the ideological barriers during the Cold War," he said at a talk he gave to YSSPers in 2007. "The iron curtain does not exist anymore, but there are many barriers left between people, nations, and religions that hamper the search for solutions to many pressing problems; therefore there is still a need for IIASA's ability to tunnel useful ideas through various barriers, whatever character they may have."

In Memory of Tibor Vasko