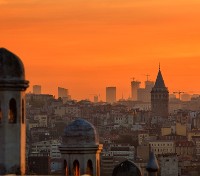 Under the patronage of Amartya Sen, President of the Honorary Advisory Committee, and Helga Nowotny, Co-chair of the Scientific Council, among others, this enterprise is modeled after the Intergovernmental Panel on Climate Change (IPCC) to produce a global assessment on socioeconomic development.

The launch of the panel and the first meeting of all lead authors will take place in Turkey at İstanbul Bilgi University, Istanbul between 27-29 August 2015. The goal of the meeting is to discuss the general orientation of the report and the method followed in the drafting of the report; to let chapter teams meet separately and finalize their outline; and to coordinate the work of various chapters on cross-cutting issues.

IIASA World Population Program Director Wolfgang Lutz was appointed to the International Panel on Social Progress (IPSP) as lead author of Chapter 17 which has the tentative title "The Boundaries of Life".

IIASA Transitions to New Technologies Program Director Arnulf Grubler will serve as a lead author on Chapter 4 of the report, which focuses on "New Growth or No Growth?"

IIASA research played a key role in establishing the IPCC and researchers from across the Institute have contributed as authors and reviewers to the IPCC reports. The World Population Program (POP), led by Wolfgang Lutz applied the new developed projections, called Shared Socioeconomic Pathways (SSPs), to the field of demography.

Similar to the IPCC, the IPSP aims at bringing together the competence of hundreds of experts to deliver a report addressed to all relevant actors in society, in order to provide them with the best expertise on questions that bear on social change. The Panel will present gritty up-to-date arguments, analyses, and debates in an accessible way, and will also foster research on the topics it will study and help to revive interest for research in social long-term prospective analysis. The report will be published under the title "Rethinking Society for the 21st Century" in 2017 and will cover the cross-cutting themes technology and innovation, globalization, social movements, identity/community, but will have a close look at wide ranging issues such as democracy, social inequality, global health and education.

For more information to the event and the panel please visit the IPSP website.